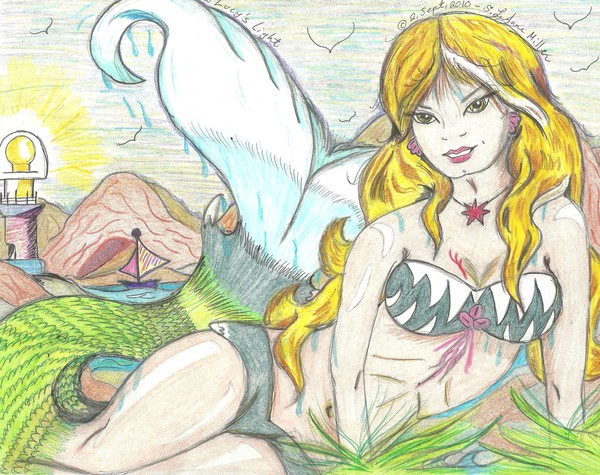 original image rendered in pencil on 20#, 8" x 11" white paper. unmatted, Penciled image, pen & inked, then finished in colored pencil. Original single artwork image. All art includes artist's name & dates. ----------------------- As a "Light-leader," (Of those lost in the dark waters,) Lucy Karydon is a "Beacon-ess with real Bite. Half Mermaid, Half White Shark, Lucy Karydon is a rescuer of lost people facing the dark, dangerous depths of the seas & oceans. The question the person would HAVE to ask him or herself would have to be: Should I trust being "led to the light of rescue...by the Mermaid, Lucy,...Or would I be putting my life in the darkest of dangers being led out to the depths of the oceans by the unpredictable White Shark Girl? ------------( Name of character created from the scientific name of CharCHARODON Carcharias--or The Great White Shark). Artist's Original Character: What turned Lucy Karydon Half-Great White, was when the rogue-ish, stubborn, teenaged mermaid had defied her mother, Thetis, and ran way from home to swim with the Giant, Great Whites in Shark Alley around the cape and coasts of South Africa. In an unexpected moment she wasn't staying aware of her situation, One of the largest Bulls (a 28 foot long White) turned on her, a sunk a tooth into her flesh covered breast bone. Lucky for Lucy, a Clan of selkies had been residing in an underwater, ground, cavern, and an elder male, who knew extensively of medicine, successfully removed the tooth. When Lucy's bite wound healed, it took on the form of a blood red trident. The trident became a brand on Lucy, to remind her of who, and What, she really was--and where she belonged. So she finally returned home; to the various waterways, canals, and coves around Greece.