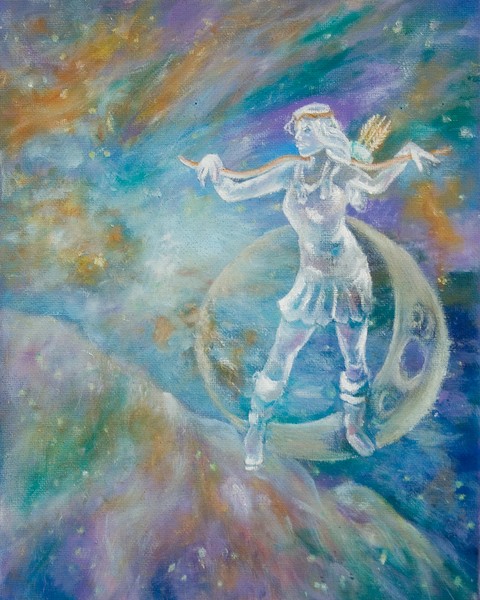 Artemis/Diana is my namesake goddess. As the goddess of the moon, she also watches over maidens as well as her friend, Orion.

"Beyond Orion's Belt" is a companion piece to this in the "Phenomenal Reality" series.

Artemis and Orion became hunting buddies, but she caused him to be turned into a constellation when her twin brother, Apollo, became jealous of the time they spent together. He arranged to have him stung by a scorpionbut Artemis intervened and both Orion and the scorpion became constellations. However they are in opposite parts of the night sky and never come in contact.

I like that she is independent of yet somewhat watchful of her friend.

Artemis Moon was painted as a companion piece to "Beyond Orion's Belt"
$ 100.00

$75 when purchased directly from the artist. Contact [email protected] for more details. . .

Great work....Great Gallery...You are welcome to look through my gallery if you so wish....Jerry Lee

Artist Reply: Thank you Jerry. That is kind of you.