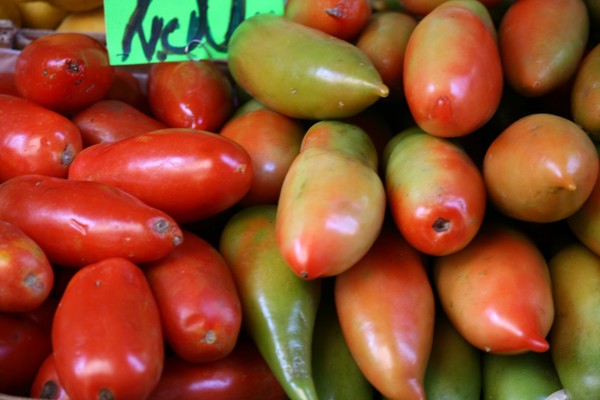 While visiting the colourful outdoor market in Bologna, I noticed long and pointy tomatoes, quite different from the Israeli kinds. San Marzano tomatoes, a variety of plum tomatoes, are considered by many chefs to be the best sauce tomatoes in the world. The story goes that the first seed of the San Marzano tomato came to Campania in 1770, as a gift from the Kingdom of Peru to the Kingdom of Naples, and that it was planted in the area that corresponds to the present commune of San Marzano. They come from a small town of the same name near Naples, Italy, and were first grown in volcanic soil in the shadow of Mount Vesuvius. The volcanic soil is believed to act as a filter for water impurities. Many people describe the taste of these tomatoes as bittersweet, like high-quality chocolate. Because of their high quality and origins near Naples, San Marzano tomatoes have been designated as the only tomatoes that can be used for a good Pizza Napoletana. The photo was taken on June 2010.

thanks for the history. yummmmm!

I would love to taste these, too!! They look delicious!!!

SUPERB CAPTURE, LILI. DID YOU TASTE THEM? ARE THEY GOOD?