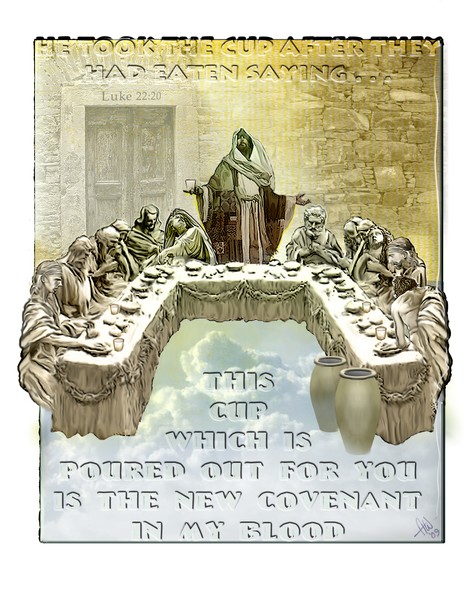 Luke. 22:20. "..He took the cup after they had eaten saying, this cup which is poured out for you is the new covenant in My blood". Paul the apostle in his letters to the young church, considered this moment as the new covenant(new testament)era beginning. Paul would teach that traditional barriers between Jew and Gentile (with relationship to God) were now broken down. All were now approved on the basis of faith in the only sacrifice acceptable by God..His son, and was ratified when He rose on the third day from the grave.

And what a great message that was for all of us! Andrew so good to see new work from you!

Artist Reply: thankyou Anneke.. I'll return again after a move and new address..maybe even take a premium membership to take advantage of artwanted's print offers. Most of these are low resolution layouts that come from personal scripture study.

this is really beautiful work, Andrew

Artist Reply: thankyou Joanna..the season got me thinking of covenants and this was the first illustrated impression from a group.