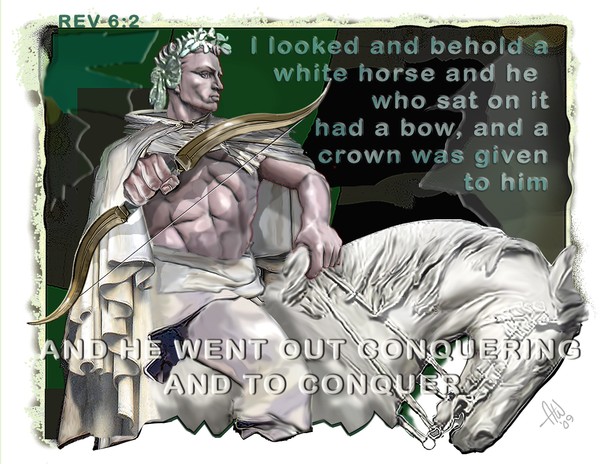 The first seal of the scroll is broken and the first horseman (the white horse rider) comes forth. Many think this is Jesus Christ but Jesus is the one who's breaking the scroll seals. Jesus appears 13 chapters later (Rev 19) on a white horse at Armageddon to rule with a rod of iron, but this rider carries a bow. This rider represents anti-Christ who conquers and dazzles a world who eagerly awards him a victor's crown for many bloodless victories (arrows aren't a deciding factor). When Christ (savior) is un-needed, he mocks that need by becoming anti-Christ (anti-savior). He is also Biblical reference of the Islam Mahdi according to some Shia sects (though the concept is not mentioned in Qu'ran). Unbelieving Jews of Jesus and the cross can't recognize Him as the one cracking the scroll's seals. The four horses represent four different banners used by Israel's twelve tribes and hold more significance than the riders.

I have been thinking of doing these passages also, but I had no idea how. Your beautiful images are an example of how it should be done, Andrew.