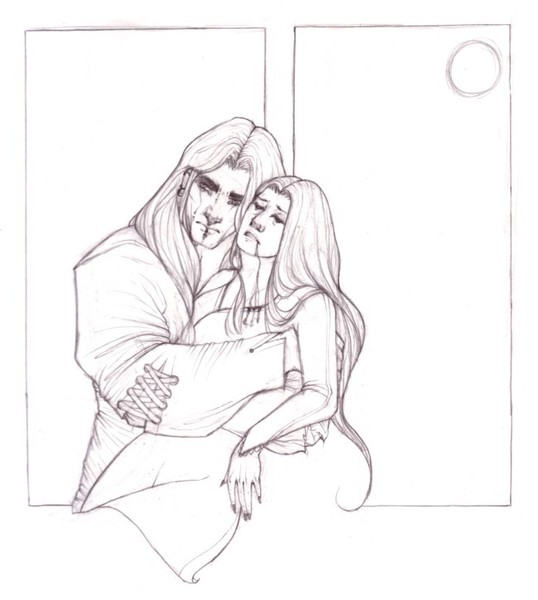 Saena. This is a character I once drew one time with Tauru (the character (woman) with purple hair, colored digitally by Alaina). This is a very different scene. Saena caught an unknown virus, a dicease. In the last weeks, she vomits blood and is very weakened. Tauru holds her in her very last breath. She is officially dead. He's looking at the monitors. But people doesn't react exactly when the person's dead but some seconds after (one or two). This is the scene where it shows her death at the nearest second. Some people would have preferred the rage, the reaction of Tauru when realising it but I thought it was to cliché. I think this is the best time to catch this: this is the last breathe and while he doesn't realise right now, he knows she'll die while she really is since half a second (or probably less). This is death. Tauru was not always that emotion-less and cold character. But I suppose this scene explains partially the reason why since the real reason is the loss of his family and not just his partner in life but his daughter too. His daughter caught the same dicease, one week after Saena's death. Aged of 4 years old, she dies after less than a week. THIS is the complete reason. This is the lineart work. (c) Kate (me)