Life, Wish You Were Here 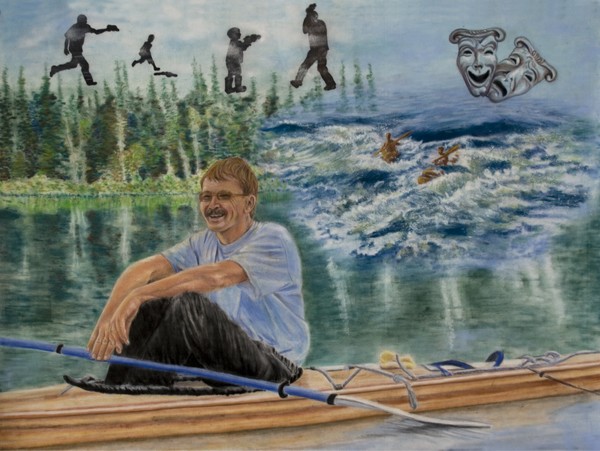 My brother Eliford, "Life" passed away suddenly this spring. He was sick a total of 11 weeks. He is my second brother to develop cancer and die within 5 years. Both at age 55. He died 2 weeks after my Mom, who developed severe dementia last year. These have been tough times. Dad too, passed away within the past 6 years. I miss them all.

This portrait was done to honour the memory of my brother, Life. The following was written in the program for the local dinner theatre production. " Eliford Mott. 1953 - 2008 This year's production was dedicated to Eliford. He was involved in the dinner theatre from its inception, including the architectural design of the rink waiting room. In the past productions, Eliford has been our director (20 plays), actor (23 plays), funny man, straight man, understudy for female roles, set builder, sound technician, make-up consultant, costume designer, driving force in the community and most of all our friend, husband, father, brother and brother-in-law. He is missed."

A bursary has been started in his name. He was also on the board of and the president of the neighboring Credit Union. He has been nominated for a presitigious award posthumously.

I could go on. But he would call himself a simple farmer.

The cedar strip canoe in the portrait was one he built by re- cycling old cedar siding. They were works of art. Two kayakers run the white-water. They represent my brother, Eliford, who joins my brother, Charlie. Not Available for Sale

1 on 1: The Fine Art of Portraiture

Hi Diana - I was perusing some of my favorite artists and came across this. Not sure how I missed it. I hope you are doing okay ... it is so difficult to lose family. Sending my light to you. You are an amazing artist, and you inspire me to paint!

Artist Reply: What a sweet thing to say. I feel your warm light. Thank you. i will always miss these wonderful people. But the hurt is not so constant. :)

OMG, you went through a lot of losses... I'm so sorry to hear.... What a special person he must have been Diana... Great tribute... Love and Light, OLGA

Artist Reply: Thank you Olga. I miss them all. I'm lucky to have had them while I did. I hope you are well.

Beautiful tribute to your brother. I see how much you loved him. My condolences on your loss. Thats so sad for him to pass so suddenly at such a young age. Cathy

so sorry for you loss diana *hugs* beautiful tribute and painting to your brother :)