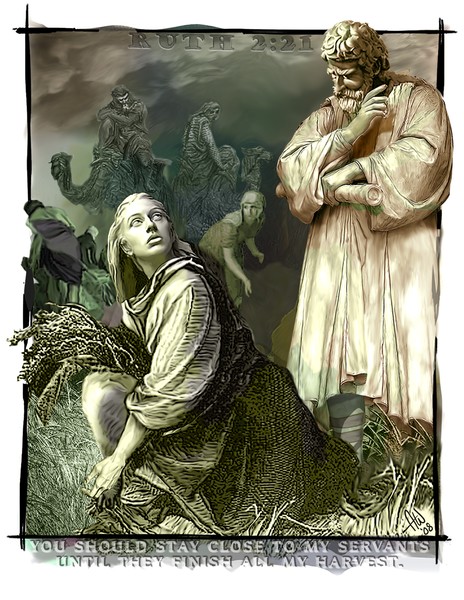 The name Ruth means "mercy" and her story demonstrates an example of God's grace beyond Israel. Although a Moabite, Ruth's role was key in God's plan. A son from her and Boaz (Obed) would be the grandfather of king David. The short book of Ruth is like a four act drama. It's prologue introduces a family moving to Moab from Bethlehem. Act1, Naomi's two daughters in law. Act2, in the fields of Boaz (the illustration). Act3, on the threshing floor. Act4, at the city gate. Naomi explained the law of "kinsman redeemer" to Ruth in act3 and Boaz uses it in act4 to redeem his kinsmen. Israel's royal line begins here with Ruth and Boaz from which Messiah would appear in Bethlehem 1200 years later.

Artist Reply: ..thanks Chas. I learned more than I intended to, while studying this book for a worthwhile image to illustrate.