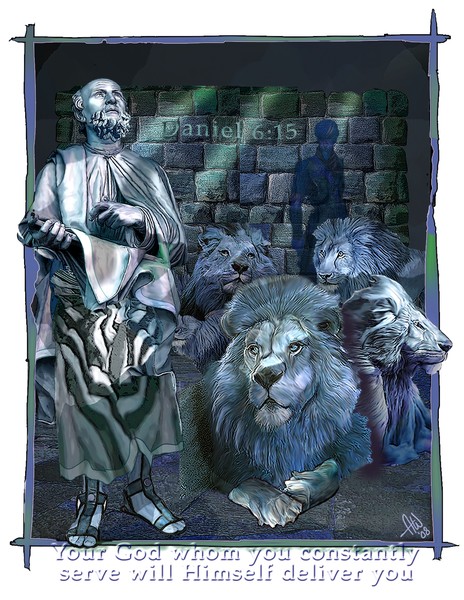 From Daniel chapter 6. Darius spoke the illustration verse to his highly regarded 80 year old magistrate. He was forced to pass a lion's den sentence upon Daniel due to a law engineered by 120 satraps and commissioners he recently appointed to oversee the kingdom. They would not accept a Jew as chief administrator over them. Their high office was a hereditary priesthood of Medes with religious knowledge and dream interpretation. 600 years in the future, members of the same priestly caste would travel to Bethlehem. They would seek and find the child said to be born as king of the Jews, but tomorrow morning Darius would make a breakfast date for his lions with his satraps. Daniel would live another 20 years.

FANTASTIC image Andrew!!! I love how you used the colors in it too....GREAT

Artist Reply: ..thankyou Cindy. The "undo" option is available for me in Photoshop when choosing colors. You guys working with real paint have a digital artist's respect.

Wonderful description and image! You've made these lions look so really peaceful, Andrew.

Artist Reply: ..thank you Anneke. They're vicious but peaceful because of an angel's presence in the background. When the satraps enter later, the angel will be elsewhere.