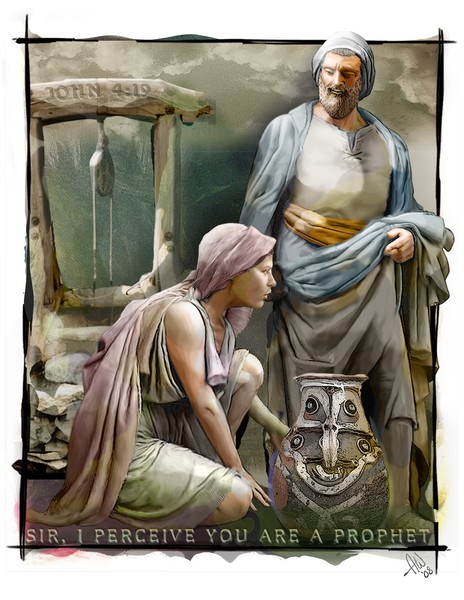 Jesus told the woman at the well that everyone who drank this water would thirst again. He spoke of water that was like a well springing up to eternal life. She asked for some of this living water and He told her to call her husband and return. She said she had no husband and Jesus saw honesty in her. He then told of her five former husbands and that the one she was with was not a husband. This is where the illustration is taking place. Afterwards, Jesus would identify Himself as Messiah, the disciples would return from the city, and the woman would leave her water pot to go tell men in the city of this man she met. Jesus stayed with the Samaritans two days before continuing to Galilee.

It looks like you moulded the figures into the image. Such great detail and wonderful emotion, Andrew!

One of my favorite stories in the bible. I love this image.

Artist Reply: ..thankyou Jamie. The diciples were learning that HIS cultural laws made way when someone's faith- thirst was sincere.