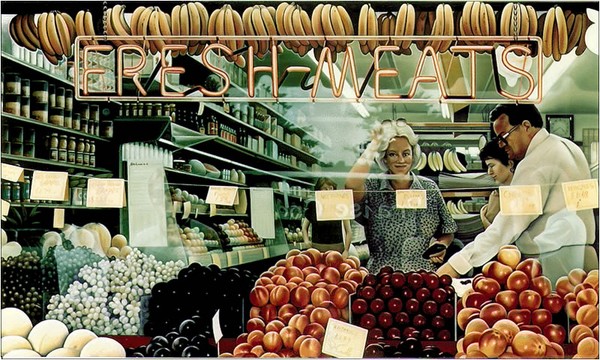 The Painting looks much much better than this Photo! (working on getting high res image) Fresh Meats , was Inspired by a store front in Boston Massachusetts called Delucas. And is more than just a pretty picture. It was done during a time when I was happily married when we were going to a bible study and being blessed, the painting is a very fruitful and spiritual piece, I am (the creator) reflected in the glass 3 times along with a van that is parked in front with words on its side (when looked at with a mirror says Praise God), and there is a dark figure hiding in back of the store… Deluca's has been at the same location for over 100 years. Born in Italy, Uncle Joe DeLuca (1900-1997)started working in the store which would later bear his name, in 1919.The store soon became known as "the place" in Boston for the finest in fresh fruit and produce. During prohibition and during the war it provided the essential needs of Beacon Hill residents as it still does to this day serving the everyday customer to historic notables such as North Pole Explorer Admiral Richard E. Byrd, President John F. Kennedy, and historian Samuel Elliot Morison all of whom lived near DeLuca's. In 1952, Joe's brother-in-law, Virgilio Aiello, who had a butcher shop in the 1930's purchased the store and added a full line of fresh meat. His son Virgil Aiello added gourmet bread, cheeses, and a complete beer, wine and liquor cellar. Virgil with his able staff still operates the store today, offering the same dedicated personal service and highest quality food products ranging from Corn Flakes to Caviar.

Fantastic painting!!! I am just bowled over by the quality , balance, and harmony!

Artist Reply: Julie thank you so much!

Artist Reply: Your comments mean a lot - Thank you!