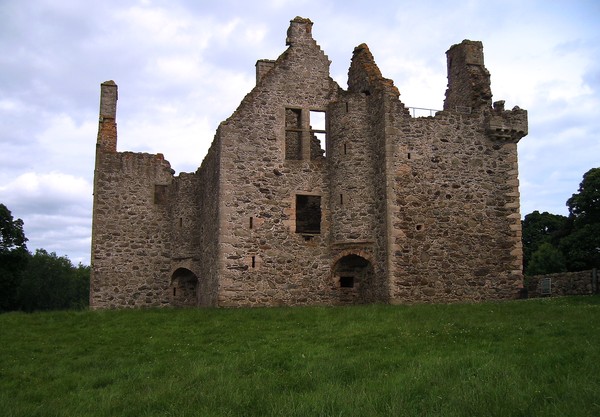 Glenbuchat Castle, a great example of the Z-shaped castle, was built in 1590 as a new residence for John Gordon of Cairnburrow and his second wife Helen Carnegie on the occasion of their marriage. There is an inscription on the lintel above the door which apparently reads :- " JOHN. GORDONE. HELEN. CARNEGIE. 1590 NOTHING. ON. EARTH. REMANIS. BOT. FAIME " Which means - "Nothing earthly can endure without good repute." An unusual feature of Glenbuchat Castle is the flying arches which supporting the stair turrets, it's possible that the Architect / Master Mason was in the employ of Sir Robert Carnegie of Kinnaird in Angus, Helen's father, who had been an Ambassador-extraordinary at the French Royal Court. The flying arches being a popular architectural feature in France and striking similarities between Glenbuchat and Hatton Castle in Angus, built in 1575 also pointing to the same builder. This branch of the Gordon family remained in Glenbuchat until 1701, when the castle and estate was purchased by John Gordon of Knockespoch for his son, yet another John Gordon who became known as "Old Glenbucket" (an old spelling). "Old Glenbuket" acquired an almost legendary reputation as a supporter of the Jacobite cause and The Earl of Mar, John Erskine, visited Glenbuchat in 1715 before the famous 1715 Jacobite rebellion where King James's standard was raised at Braemar. The Gordon's had stopped living in Glenbuchat by the time it was sold in 1738 and was already partly unroofed, by the mid 19th century it was, sadly, completely unroofed. In 1901 MP James Barclay bought the Glenbuchat estate and set about some essential repairs to conserve the castle. In 1946 Colonel James Barclay Milne gave the castle to the state and in 1948 the Deeside Field Club purchased the Castle park, which they promptly gave to the nation to protect the setting of the castle.

What a fascinating historical tale.... you must know a lot about architecture as I have no idea what flying arches supporting the stair turrets are. But for all my ignorance, this is a stunning photo ...and so sad to see the castle come to ruin.

This photo is very captivating, Andrew! I love Castles! They intrigue me and they always stir something within my soul!