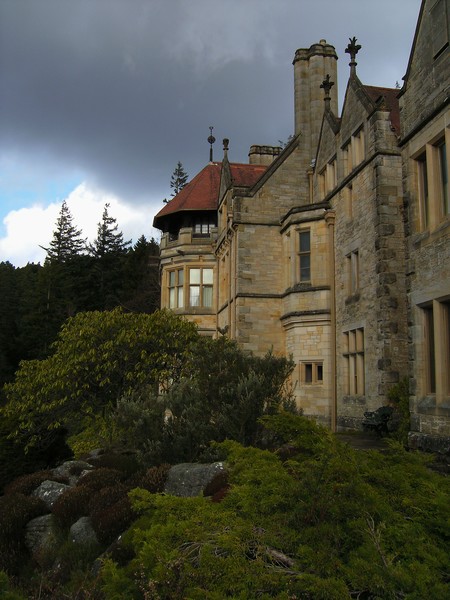 Cragside House in Northumberland, England. Cragside was the first house in the UK to be powered by Hydroelectricity. Lord Armstong was a prominent engineer and businessman who designed the system himself. The house was also one of the first anywhere to have electric light, using the bulb designed by Joseph Swan, who invented the lightbulb in the UK 1 year before Thomas Edison. Edison obtained patents in America for a direct copy of the Swan light, and started an advertising campaign which claimed that he was the real inventor. Swan was less interested in making money from the invention, agreed that Edison could sell the lights in America while he retained the rights in Britain, eventually they agreed to go into business together with the Edison & Swan United Electric Light Company (Also known as Ediswan). Well worth a visit.

Such a foreboding feel to this fantastic photo! You are lucky to have these ancient buildings at your disposal to photograph! A very interesting story as well... I had never heard of this before.

what a beauty this place is and what an interesting story line I did not know this. You did a grand job to capture its beauty nice work

A fantastic shot Andrew!! What a beautiful place!!

Absolutely beautiful, Andrew! You did a wonderful job with this photo and what a magnificent house! I somehow was recorded as an anonymous Guest! I thought I'd retype this, so you will know who it's from!

Absolutely beautiful, Andrew! You did a wonderful job with this photo and such a magnificent house!