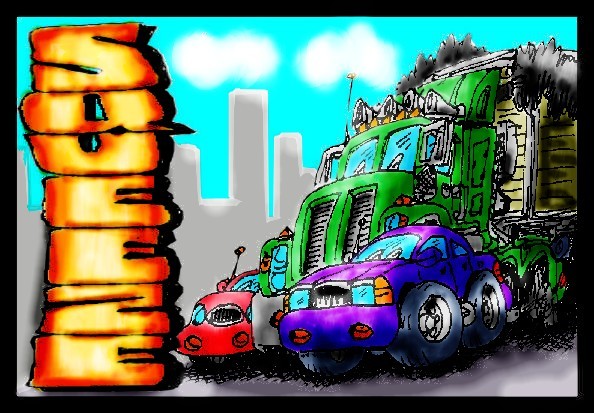 (c)2008 Squeeze play is something every trucker dreads,...being surrounded by little compact cars,...or as I call them, (by their behavior!), mosquitoes!!! Or,...flies would be appropriate too!!! There's an old native american saying, "Don't judge a man until you've walked a mile in his moccasins." Drivers,...at least here in California, should apply that saying to their driving,...and to their daily lives too. See things from the other persons view and cut some slack on other people's doings,...we're not judge,...and there might be a good reason for their behavior. Just as seeing the freeway or city traffic from the truckers viewpoint and drive accordingly is how to be a courteous driver. So,...we should all watch our driving,...and don't be giving the truckers the squeeze play! :O)

nice work gregg, love the idea and style of your work,great colors too

your felt tip works are SUPERB!

This is simply excellent Gregg! I always enjoy your work and a great message too!!