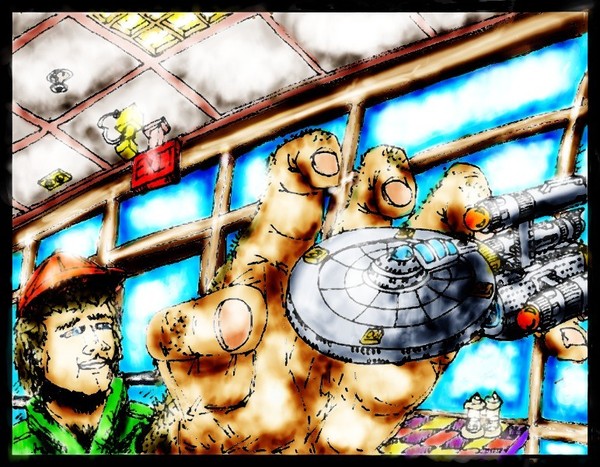 (c)2008 Grabbing the future may look fun, pleasant, enjoyable and for many, exciting. But a closer look at that future almost nearly upon us, gives a true appearance of evil, wickedness, corruption, injustice, deception on a massive scale, the appearance of order but in reality extreme confusion. Technology now peaceful will become weapons of deceit and spiritual death. A world united into seven parts with ten kings ruling together all in the name of peace, peace, peace and with a rainbow image of it's coalition to accept all despite wrong doings unrepented of and actions opposite of words. Yet everything will seem so acceptable under the new world morality. And with a world economy pumping out products at top speed everybody will have everything they ever wanted or needed in abundance. New gadgets, and new toys everyday something new and exciting and enticing. Then,...suddenly,...a great tumult takes place threatening to bring the new world order all crashing down. And then,....with bright lights,...all over the globe,...shining, glistenning,....thousands of spaceships appear darting openly and obviously in full view to everyone everywhere. Al all around the globe they land, in key areas and cities on Earth,...but especially Jersusalem,...bright shining, glistenning supernatural human looking beings looking like, appearing as though, and saying they are the men of the past,...of the bible,...and Messiah as well. Amazing wonders they will do and perform in and among all the citizens of Earth now tied together in instand communication with each other everywhere. All are the media, the press is everyone everywhere sharing what they see and hear to everyone else instantly,....as if everyone were standing together in a crowd. These new visitors heal the tumult and unite the world tighter together. Like the internet is now,...everyone will say or do whatever they want with no rejection by anyone or even their new Messiah will give his approval and encouragement. Massive worldwide, televised orgies, rapings, anything and everything imaginable will be the order of the day. A one world Sodom and Gammorah,....that's the real future soon upon us. But there will be a few who will stand strong against the chaos and confusion,...they are God's elect and the two witnesses from God doing miracles and eventually,...wide instant wordwide vote,...will be delivered up to who is in reality Satan as anti-christ performing this one world deception. And when you see your Jesus murder the two witnesses of God know that three days later is the seventh trump and the King of kings and Lord of lords to put and end to it all! Praise God,...may that day come quickly! :O)

A BRILLIANT PIEECE OF WORK GREGG!