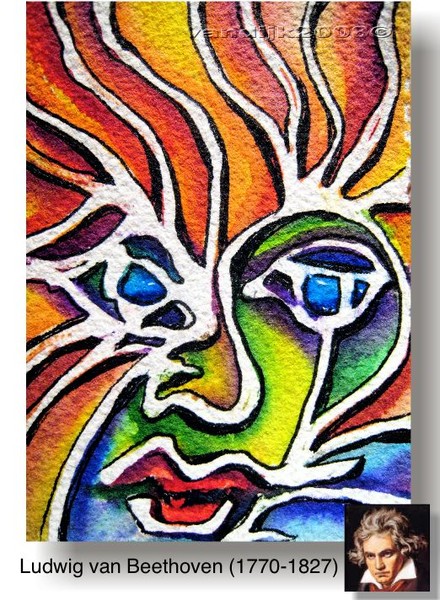 “…His wild eyes - full of turbulent energy- draw you into Beethoven's inner soul, while his unkempt and wild hair remind you that this man did not look conform to the norm. ...


I love to play this famous mysterious, almost haunting melody myself. It is dark and whisper like. The form of the first movement is a sort of “condensed” sonata. In other words, it plays the main melody, developing it, and then plays it again very similar to how it was originally played.

Background of the "Monschein Sonate" (Moonlight Sonata)
The original title of the sonata is “Quasi una fantasia” (almost a fantasy). The popular title of Moonlight Sonata actually didn’t come about until several years after Beethoven’s death. In 1836, German music critic wrote that the sonata reminded him of the reflected moonlight of Lake Lucerne. Since then, the Moonlight Sonata has remained the title of this beautiful sonata.

Beethoven composed the famous Moonlight Sonata in 1801 and dedicated it to Countess Giulietta Guicciardi, a pupil of Beethoven. Shortly after their first few lessons, the two fell in love. After dedicating the Moonlight Sonata, it is believed that Beethoven proposed to her. Although she was willing to accept Beethoven’s proposal, her parents prevented her from marrying him.

Beethoven was a crucial figure in the transitional period between the Classical and Romantic eras in Western classical music, and remains one of the most respected and influential composers of all time. Abstract ACEO (2.5 x 3.5 inch) watercolor and Indian black ink on cold press heavy weight paper 140 LB (330 g/m2)
Copyright Olga van Dijk 2008©
Unauthorized copying or use of images is prohibited.
With thanks to Aaron Green

Wonderfully full of energy and personality! Love it!!!

Olga, This is a fabulous ACEO card AND painting! So, that's what he really looked like! Ting

I love the way you compose this great, creative art work!