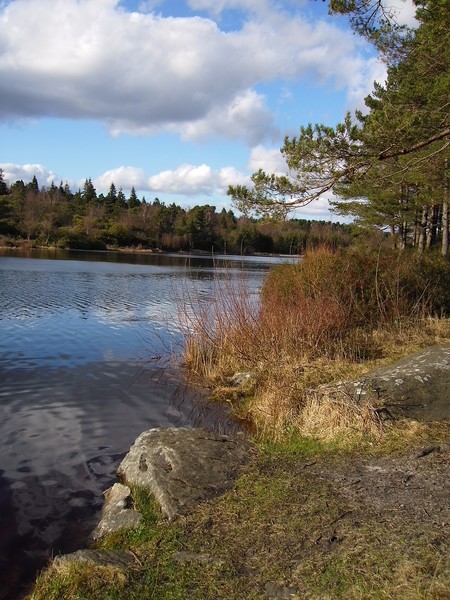 A lake in the grounds of Cragside House in Northumberland, England. Cragside was the first house in the UK to be powered by Hydroelectricity. Lord Armstong was a prominent engineer and businessman who designed the system himself. The house was also one of the first anywhere to have electric light, using the bulb designed by Joseph Swan, who invented the lightbulb in the UK 1 year before Thomas Edison. Edison obtained patents in America for a direct copy of the Swan light, and started an advertising campaign which claimed that he was the real inventor. Swan was less interested in making money from the invention, agreed that Edison could sell the lights in America while he retained the rights in Britain, eventually they agreed to go into business together with the Edison & Swan United Electric Light Company (Also known as Ediswan). Well worth a visit.

Artist Reply: Many thanks I'm glad you like my work. Regards Andy S

This is very beautiful! I know someone from London, England and he told me that Virginia, where I take a lot of my Blue Ridge Mountain photos, is much like the countryside in England! I can see that in your photo! It does look very much like the places I photograph in the mountains! Great job!

Artist Reply: Sorry Shannon you just had me singing for a moment there, luckily you can't here that... lol Anyway I'm delighted that you like my work and better still something that reminds you of home. Regards Andy S

This is a beautiful photo Andrew! Gorgeous!

This is just perfect, Love the skyline and the water just amazing how you capture this nice work

Artist Reply: Many thanks for your kind words Gerry, some days everything just goes right. Regards Andy S

Artist Reply: I'm glad you enjoyed my work Kimberly, thanks so much for taking the time to post a comment it means such a lot. Regards Andy S