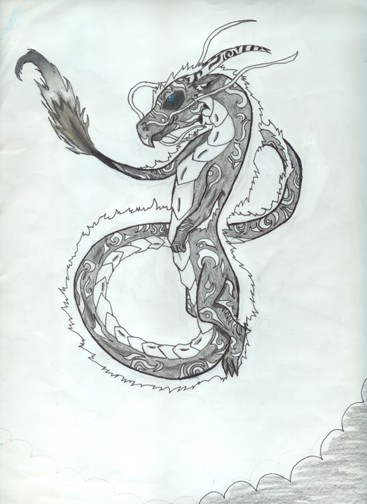 In the beginning, there was the world, the only dragon and of course no colour. There was a myth though. A myth about a dragon who held this beautiful thing in its eyes, a thing so beautiful you could never compare it to anything else. Looking in your lovers eyes could not even bring you joy after seeing this beautifully amazing sight. This amazing thing was called colour but the Dragon Which Had No Name hoarded all the colour in the world to itself, thats how selfish it was. So a group of young men who wanted nothing more than to see this amazing thing called colour... Searched, and searched for atleast 10 years. Until finally the found the Dragon With No Name. They gallantly fought till the end, till only one was left and released colour unto the world, only... They never got to see it themselves. So the saying the goes that anyone with blue eyes is really a relative of those amazing heroes who brought the beautiful thing called colour unto the world. So they say... But I believe all the people with brown eyes are REALLY related. Done with pencil, pen , a bue coloured pencil, and a silver pen :] sorry for not posting in sooooooooooo long this is a really old drawing... I had so many more but I seem to have lo st them, but dont worry! I should be on more... but if im not blame my mom lol (joking!) but yea bye :] ( sorry i havent posted in like...a year >.< )

What an awesome dragon, Allanna !! Truly one of the most beautiful I've seen. And, the work itself is wonderful ! The myth is great, too!! Very glad to see you posting again and looking forward to seeing more. :)

Thank you Abby, that means alot to me coming from you :] Long time no type ey?

Artist Reply: Sorry people :O this is NOT Bluemoonshadow, I forgot to sign out when replying, soooo I accidentally posted a comment.......... this is supposed to be a reply to A penn's comment :] sorry for the mix up :]

love your story about the dragon which had no name! The drawing is fantastic!

Artist Reply: Thank you so much!To tell you the truth it was off the top of my head ><