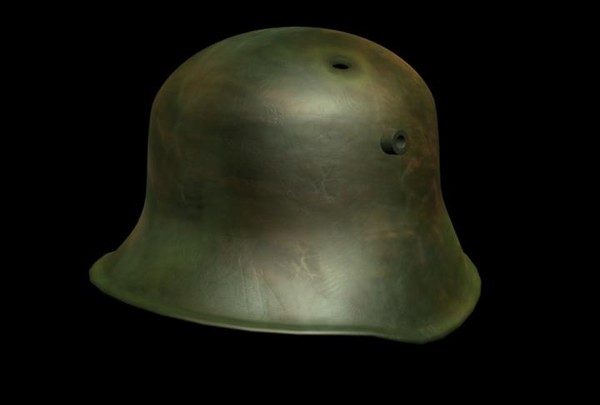 Behold! The fruits of my labor! This is my 3D lighting and materials assignment, a WW1 German M-16 Stahlhelm. Why, of all the texture assignments I could have taken on, did I choose this? Believe it or not, it's a tribute to Walt Disney himself. A little known fact about Walt is that, back when he drove ambulances in WW1, he came accross a stock of barely used German helmets. Walt took the helmets and virtually beat the hell out of them to make them appear battle worn. He even shot the helmets, some testimonies claim he hot glued hair on the inside, ultimately to sell to American vetrans as genuine war trophies. XD I spent a great deal of time working on this shader system. It includes basic steel, the paint, a scratch + ding layer, a pastel layer (Walt was said to have coated them with pastel in order to appear more worn), a mud layer, and a projection node that simulates a bullet hole (the hole's actually a transparancy map coupled with a displacement map.). All the individual layers have specular maps, bump maps, etc, etc, and (here's the best part) it's all done 100% in Maya; no photoshop. (Made this a wee bit more interesting of a challenge). I was originally going to add a projection node with blood information since Walt was also said to have coated the helmets in chicken blood. Yes, I could go back and add the blood, but considering that I haven't slept in two days well, I think i'm going to cut my losses and get some sleep. -------------------- Modeled, Textured, Rendered, and Lit in Maya 7.0.

Looks like you're ready to create a whole universe in the virtual,ay?Nice skills..I hope you show more!