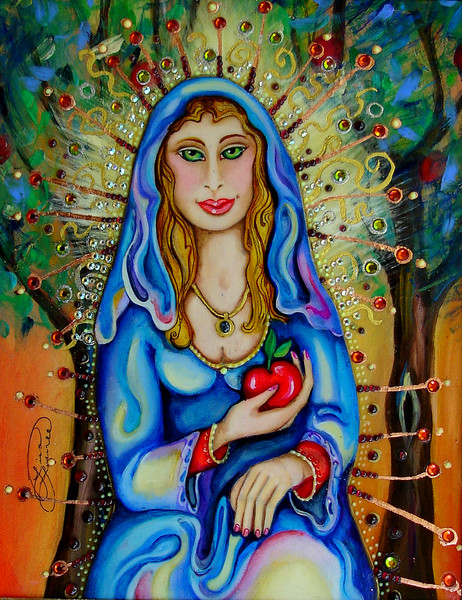 The Madonna is an icon that represents the feminine in it's purest form. She is the symbol of perfection. In this piece the Madonna holds an apple. The apple symbolizes knowledge and enlightenment. The apple (comprised of the skin, the flesh and the seeds) also represents the Trinity . The trinity can be seen in each of us....body, spirit and soul. This Madonna symbolizes a dichotomy between perfection (the Madonna herself), innocence and naiveté and the knowledge (science) that often disproves beliefs that we have held onto dearly, but at great cost. Eve held an apple and her eyes were opened. The Madonna has not taken a bite, the apple remains intact. However, it's temptation is present and she holds truth, a powerful force. The process I used to complete her was INCREDIBLY time-intensive, including layer upon layer of thin paint glazes, followed by a fine layer of varnish and then more glazes of color. The Madonna was cut out from a different foundation and mounted to the background, giving her a 3D effect. After placing her I completed more glazes of color and more layers of varnish. The embellishments came next: 24K Gold Leaf (which is interestingly powdery and difficult to work with), Sterling Silver Leaf, and then Copper Leaf (the Silver and Copper must be varnished as they are also Genuine Metals - or they might tarnish). When I knew the painting had it's last coat of varnish, I used Genuine Swarovski Crystals and Real Garnet Cabochons (the deep blood-colored round stones you see in this piece). This piece is LOADED with Garnets and Crystals! The Madonna has a Genuine SAPPHIRE in her pendant! Finally she was ready to frame. To create the frame I used a bare wooden frame and applied a Gorgeous Red/Gold Variegated Leaf. This process was also quite time- intensive, including several layers of varnish. The last step was to lay down the Glow In the Dark paint. You will LOVE how this painting looks at night when the lights are out, a real surprise! This piece is framed and is available for sale.

A stunning work of art!

your words are true! the madonna we carry all In us but people has placed that outside! A wonderful breathtaking work Lisa!