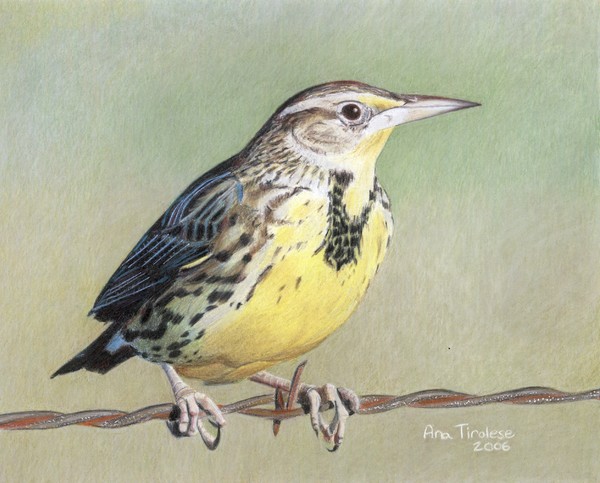 Their breeding habitat is grasslands and prairie, also pastures and abandoned fields, across western and central North America to northern Mexico. Where their range overlaps with the eastern species, these birds prefer thinner, drier vegetation; the two birds generally do not interbreed but do defend territory against each other. The nest is on the ground, covered with a roof woven from grasses. There may be more than one nesting female in a male's territory.

These birds are permanent residents throughout much of their range. Northern birds migrate to the southern parts of the range; some birds also move east in the southern United States.

These birds forage on the ground or in low to semi-low vegetation, sometimes probing with its bill. They mainly eat insects as well as seeds and berries. In winter, they often feed in flocks.

This bird has a flute-like warbled song, unlike the simple whistled call of the Eastern Meadowlark. They were considered to be the same species for some time; the western species, having been overlooked for some time, was given the species name neglecta.

This is the state bird of Kansas, Montana, Nebraska, North Dakota, Oregon and Wyoming.
-- Wikipedia

Your birds are so perfect....You could illustrate a birds album...Wonderful done!

Thank you Ana, about the information. I love birds... Weell done and sensitive work! Lovelly painting.(Teresa Ramalhão, jose fortunato cousin, and a new member at AW...)

I love this one! Very well done indeed.