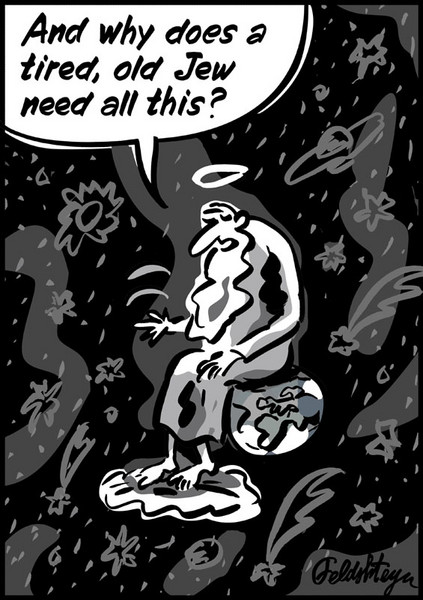 This cartoon was made for the "Israely anti-Semitic cartoons contest." A few words about this very special competition: A Danish paper publishes a cartoon that mocks Muslims. An Iranian paper responds with a Holocaust cartoons contest. Then a group of Israelis announce their own anti-Semitic cartoons contest! Eyal Zusman (30) and Amitai Sandy (29), graphic artist and publisher of Dimona Comix Publishing, from Tel-Aviv, Israel, have followed the unfolding of the "Muhammad cartoon-gate" events in amazement, until finally they came up with the right answer to all this insanity - and so they announced the launch of a new anti-Semitic cartoons contest - this time drawn by Jews themselves! "We'll show the world we can do the best, sharpest, most offensive Jew hating cartoons ever published!" said Sandy "No Iranian will beat us on our home turf!" It has been a great success. The announcement reached dozens of newspapers, TV networks and radio all over the world, from Russia to Brazil. Around 150 cartoons have been submitted in 3 weeks. To learn more about the results please use one of the following links: http://www.cartoonblues.com/Andre_news_antisemitic_contest.html or http://www.boomka.org/

I like your style of cartooning and think most of your work interesting... Although I don't believe your message to be that of a hateful nature, I have to say it saddens me that people keep the prejudice that fuels bigotry & hatred alive by supporting and participating in contests like this.

Artist Reply: Dear Robin, Thank you for your thoughts. I am glad that you do not attribute my cartoons to the art of hatred. Yes, they rather belong to the traditional self-targeted Jewish humor. Speaking about the participation in such contest... In a way this competition was for inner use. Only Jews could submit their works. The idea was to take the wind from the enemy's sails, to show that we strong and wise enough to laugh at ourselves. For me the indicator of "rightness" for such action was the participation of Art Spiegelman as a Jury member. (I will remind that Mr. Spiegelman was a Pulitzer Prize winner for his Holocaust story.) I wish we could show more taste among submissions, but the deadline was really short. On the whole I consider this contest as good and intelligent response to Iranians. And it was considered as such by dozens of newspapers, TV networks and radio all over the world. Thanks again.