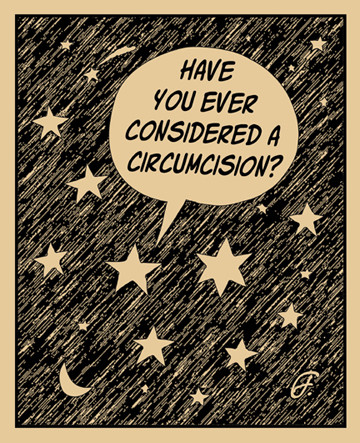 This particular cartoon won a Third place in the "Israely anti-Semitic cartoons contest." A few words about this very special competition: A Danish paper publishes a cartoon that mocks Muslims. An Iranian paper responds with a Holocaust cartoons contest. Now a group of Israelis announce their own anti-Semitic cartoons contest! Eyal Zusman (30) and Amitai Sandy (29), graphic artist and publisher of Dimona Comix Publishing, from Tel-Aviv, Israel, have followed the unfolding of the "Muhammad cartoon-gate" events in amazement, until finally they came up with the right answer to all this insanity - and so they announced the launch of a new anti-Semitic cartoons contest - this time drawn by Jews themselves! "We'll show the world we can do the best, sharpest, most offensive Jew hating cartoons ever published!" said Sandy "No Iranian will beat us on our home turf!" It has been a great success. The announcement reached dozens of newspapers, TV networks and radio all over the world, from Russia to Brazil. Around 150 cartoons have been submitted in 3 weeks. To learn more about the results please use one of the following links: http://www.cartoonblues.com/Andre_news_antisemitic_contest.html or http://www.boomka.org/

Now, THAT is funny!!!! And I love the concept of the contest. Are you Israeli? And is the contest open only to Israelis? Guess I'd better visit the site.