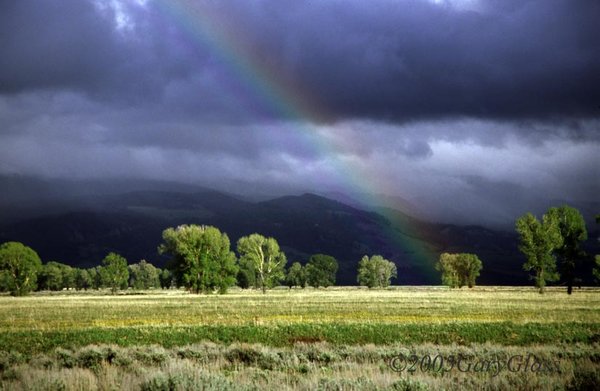 This area of Jackson Hole is known as Mormon Row. Dozens of Mormon Homesteaders settled in this area of Jackson Hole back in the late 1800's to around 1910. Mormon families who filed claims near Blacktail Butte built their houses along a three-mile lane that became known as Mormon Row. There are still some buildings/barns left over as kind of Historic relics of the region. As I landed in Jackson Hole Airport on my recent trip there, I was headed towards Yellowstone when I spotted this rainbow materializing from the storm that had just blown through the region I quickly drove down this familar road I have been down dozens of times photographing the barns to try and capture it. It only lasted maybe 5 to 8 minutes at best. This is the results..( Part2 of Rainbow Over Mormon Row Series)©2005GaryGlass

OH this is so lovely.

wow...love the rainbow! The rainbow is to remind us of our covenant with God!