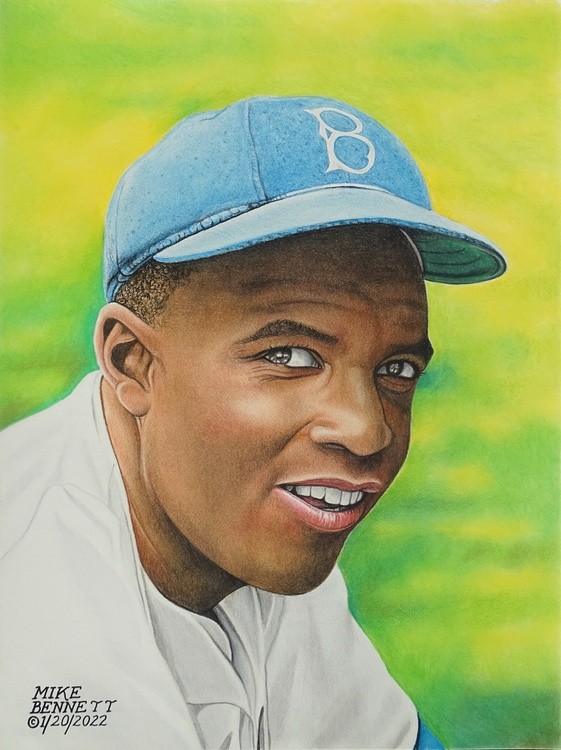 JACKIE ROBINSON #42 Jackie Robinson broke the baseball color barrier on April 15, 1947 when he started at first base for the Brooklyn Dodgers. When the Dodgers signed Robinson, it began the end of racial segregation in professional baseball. Up to that time, black players could only play in the Negro leagues since the 1880s. During his 10-year Major league Baseball career, Robinson won the inaugural Rookie of the Year Award in 1947, was an All-Star for six consecutive seasons from 1949 through 1954, and won the National League Most Valuable Player Award in 1949—the first black player so honored. Robinson played in six World Series and contributed to the Dodgers' 1955 World Series championship. Robinson was inducted into the Baseball Hall of Fame in 1962. He died on October 24th, 1972.

The sketch will be sent in the continental United States postage free and unframed. It measures 18x24 inches.
$ 400.00

Excellent portrait artwork Mike of the Baseball Great. If you get a chance to Mike, watch The Jackie Robinson Story movie (1950) on YouTube starring Jackie Robinson playing himself and Ruby Dee as his wife.

Artist Reply: Thank you Veronette. I have seen the movie many years ago. I certainly will check it out again. The movie was made before his career was even over. That is a first.

Artist Reply: Thanks you Joanie.