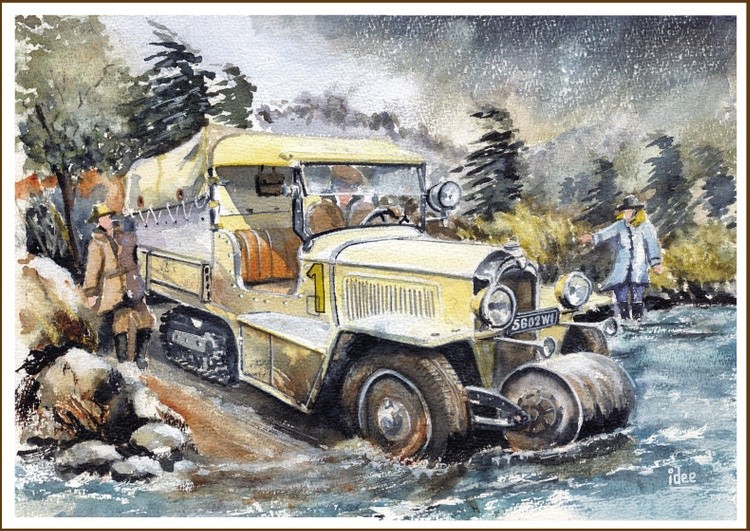 Haughtiness comes before the fall! André Citroën, supported by the great media attention, thanks to the success of the tours through the Sahara (1922), the "Black cruise" through Africa (1924-25) and the "Yellow cruise" through Asia (1931-32). tempted to organize another trip, this time across northwestern Canada. The trip was organized by Andre Bedaux and was undertaken in five of the latest Citroën-Kégresse half tracks. A crew of 17, including Bedaux, his wife and ... his mistress, left Edmonton on July 4, 1934 and launched an attack on the Rocky Mountains. They soon faced unforeseen and insurmountable difficulties due to torrential rains, flooding and mudslides. Three out of five vehicles were swept across swollen rivers and the other two had to be abandoned on August 16, engulfed in mud. The fameless return took place on horseback and by train back to Edmonton, where they arrived on October 24, 1934. Had André Citroën underestimated this trip, insufficiently prepared or were the crew members too snooty to stop the trip in the disastrous weather conditions? This fiasco probably explains why this Citroen cruise is not very well known and there is hardly anything to be found about it. Image size: 260 x360 mm

Such precise art.......always a pleasure to view your artwork.

Artist Reply: Many thanks Alan

There's that rotating drum again. Now I wonder if it's part of a flotation rig? though it seems woefully undersized for the weight of that beast. They should probably have quit with these Crusades back in the 1400's.

Artist Reply: Hi James, meanwhile I know that this drum was only used to clear obstacles. I don't find that thing not very effective because its width is between the wheels and not before

WOW IVO. THIS IS SPECTACULAR. ONE OF MY FAVORITES OF YOURS. LOVE ALL THE MOVEMENT AND DETAIL IN THIS BEAUTY.

words fail me with your talent x

BEAUTIFUL WORK IVO. GREAT STORY. NO WONDER THEY WANTED TO KEEP IT QUIET.