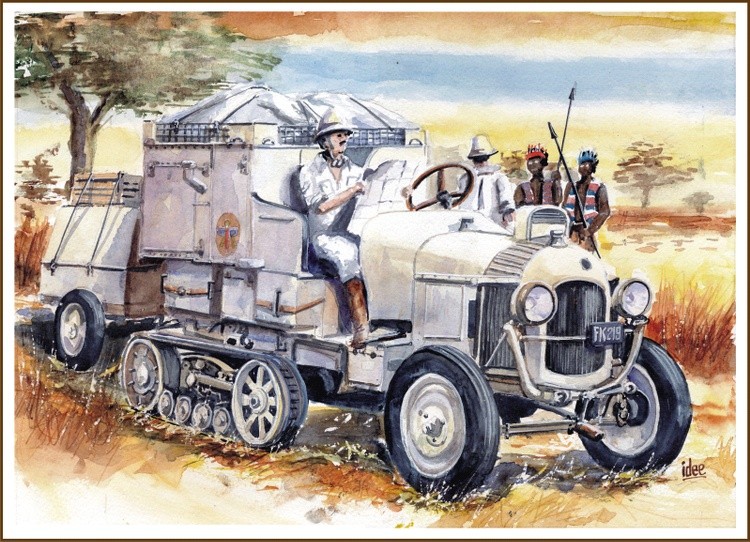 Andre Citroën, of the car brand of the same name, was an ambitious and energetic man. Already in 1922 he organized the project "Transsaharien" with some cruises through the Sahara desert, so to speak to open up this area for motorized traffic but above all to promote the reputation of the brand. These tours were no easy feat with 10 hp half-tracks and, in collaboration with the Kégresse company, equipped with a predecessor of today's track drive. But the project is stagnating and André Citroën sees it even bigger, he wants to cross Africa, from north to south, a journey of, all in all, 20,000 km, the "Black cruise". He even dares to dream of tourist road trips with luxury hotels along a route that does not yet exist. The cruise, which takes place from October 28, 1924 to June 26, 1925, is undertaken with the same half-tracks as in the Sahara but now with 15 hp engines modified to withstand the tropical climate, so on top of the radiator comes a vapor recuperator and side, additional, diagonally placed, radio tower placed to double the cooling surface. The transmission will have a six-speed (instead of three) and four-wheel drive. It was a very complex trip, with numerous objectives, both political and cultural, among the participants were an ethnologist, a geologist, a meteorologist, an anthropologist, a geographer and a whole film crew. With unreliable maps, the journey often went off-road and through dangerous areas, not all Africans admired "the rich white man" and his technology at that time. But Andre Citroën could rest assured, the whole world press wrote about his stunt.

TOTALLY OUTSTANDING, IVO. AS ALWAYS, I LOVE THE MAGNIFICENT DETAIL IN THIS.

Gazzooks Ivo ! Another wild Citroen half-track land cruiser !!! Now this is traveling in style. What a ride !

Artist Reply: It was not that comfortable, fortunate that, through political support, they got the cooperation of benevolent tribes to make their way through crossing three-meter-high elephant grass or rivers on rafts made of tied prow. Not to mention the health problems