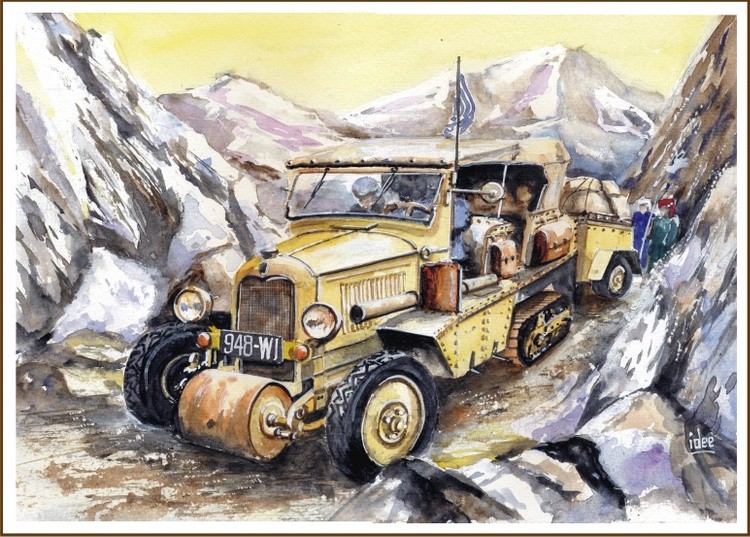 With this 13,000 km trip from Beirut to Beijing organized by Andre Citroen, he managed to attract the attention of the whole world. The journey took place between April 1931 to February 1932 and runs on the way through Turkestan, Xinjiang and the Gobi Desert and on the way back through Hanoi, Saigon, Bangkok, Calcutta, Delhi, Quetta, Isfahan, Baghdad and Damascus. Officially, the intention is to open the old Silk Road for motorized traffic, but the main aim was to make the brand win the coveted Henry-Deutsch-de-la-Meurthe Prize of the Sports Academy, a sporting event that could lead , and I quote: to material, scientific or moral progress for humanity (!?!?) and it was certainly a strong promotion for the Citroen tracked vehicles, half-tracks built in collaboration with the company Kégresse. It was a well-prepared project, mainly because Citroën benefited from the experience gained in the 1920s traveling through the Sahara and across Africa (the Black cruise). In the second half of the 1930s there was another trip through Canada (the White cruise), but it ended in fiasco and was not widely publicized. The Yellow Cruise was often a tough journey but certainly a success, books were written, documentaries were made and even a comic serie was published. Image size: 260 x 360 mm

SO MUCH INCREDIBLE DETAIL, IVO. I LOVE IT.

Ya got me this time, Ivo. Other than the name Citroen, and the manufacture of their automobiles, few of which ever show up on this side of the Atlantic. I was unaware of these travel cruises ( Silk Road excepted) or the effort behind tem. They certainly resemble advanced versions over their war tested military vehicles from WWI. Very interesting. Thank you.