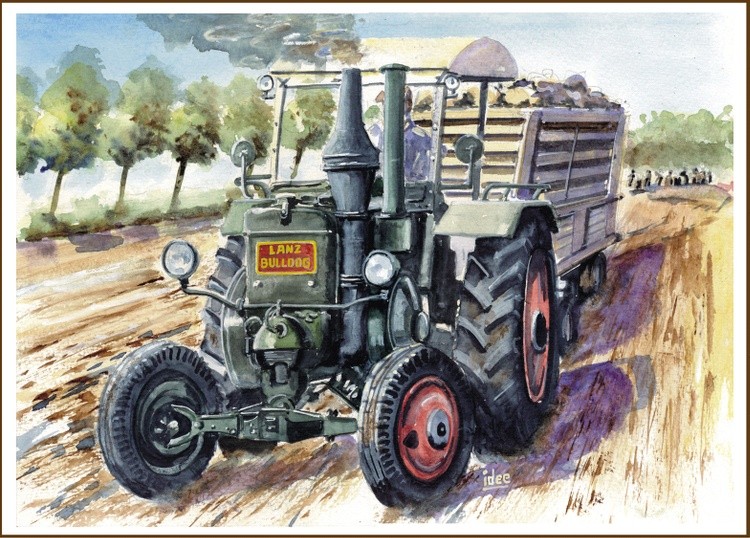 A long time ago I heard old farmers speak with admiration about their indestructible Lanz Bulldog tractor but also about the troubles to get that thing going, especially in winter. I had no idea what machine they were talking about until years later I saw some during a procession of old farm tractors and indeed they were special. The Lanz Bulldog is a type of tractor developed by the German manufacturer Lanz. The tractor was designed by German engineer Fritz Huber and had a horizontal single-cylinder two-stroke hot-bulb diesel engine. Because of this single cylinder, the tractor had a characteristic sound, a staccato "boom-boom" sound. This machine was able to blow beautiful pancakes. It was built by Heinrich Lanz from Mannheim. In 1950 a partnership with John Deere was established. In 1958, the company was taken over by John Deere. Other brands also installed this engine with moderate success. Image size: 260 x 360 mm

Artist Reply: Thanks Jim, so you do know what those Bulldog tractors were

ONE MORE IN YOUR FABULOUS WORK AND COLLECTION. WELL DONE IVO !!

Great painting and such interesting history. Thanks for sharing both with us!

Artist Reply: Many thanks Ginger