The city of Mostar 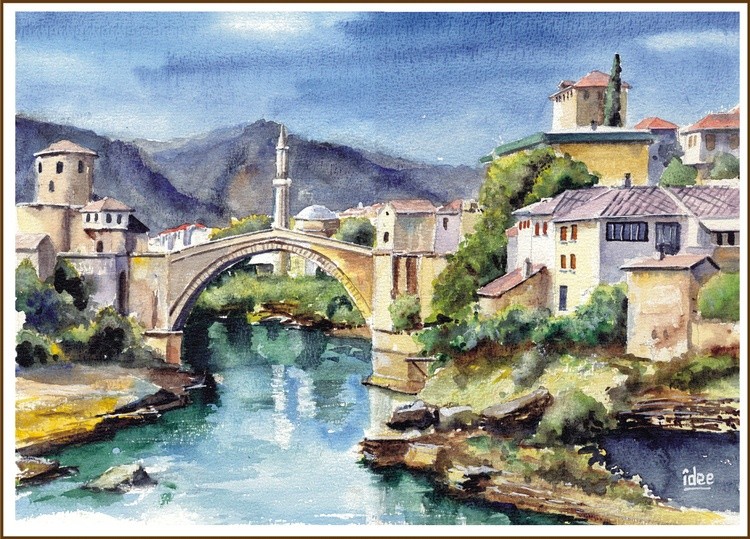 This idyllic city is a tourist attraction in the Republic of Bosnia - Herzegovina, which used to be part of old Yugoslavia. In the old part of the city you will find the graceful bridge "Stari Most" (literally Old bridge) built in the half of the 16th century, which with its height of 19 m, length of 28 m and width of 4 m spans the Neretva River. The city, however, had a dark time when Croats and Bosnian Muslims, who had lived together peacefully until then, came to face each other, along the banks of the river, during the Balkan war of the 1990s. The age-old bridge was destroyed in 1993. After the war, a start was made with the construction of a replica of the bridge that was completed in 2004. Since 2005, the new "Stari Most" has been declared a World Heritage Site by UNESCO. In that year we drove along the Croatian coast, on the way to Dubrovnik, and arrived 25 km from Mostar. For a moment we thought to visit this once so beautiful historic city, but the idea of visiting the place surrounded by armed soldiers of the NATO peacekeeping force did not appeal to us. Today the city is divided into a Croatian and a Muslim part, although it may take a long time before the wounds are healed. Image size: 260 x 360 mm

VERY NICE .. ONE OF MY FRIEND VISITED BOSNIA- HERZ . SIX MONTHS AGO AND PERSUADED THIS IS A TRAVEL TO PLAN TO DO .. MAY BE ONE DAY ..

BEAUTIFUL WORK MY FRIEND. I DO ENJOY MY WORLD TOUR, THROUGH YOUR BEAUTIFUL ART WORK. THANKS.