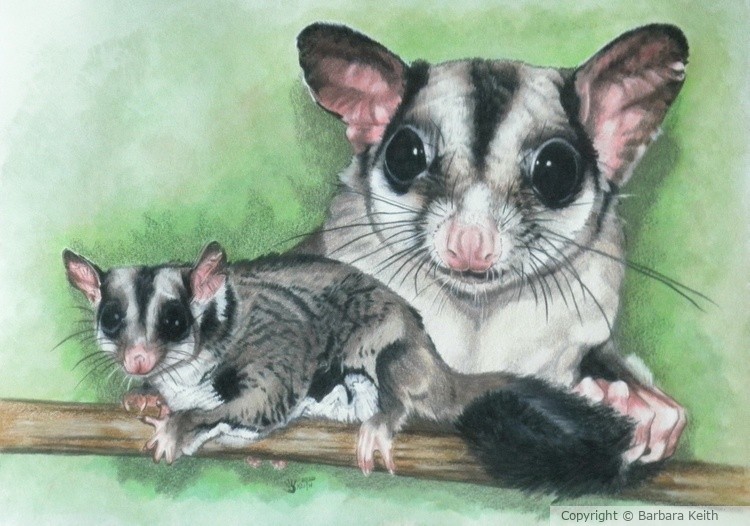 he sugar glider (Petaurus breviceps) is a small, omnivorous, arboreal, and nocturnal gliding possum belonging to the marsupial infraclass. The common name refers to its preference for sugary foods such as sap and nectar and its ability to glide through the air, much like a flying squirrel. They have very similar habits and appearance to the flying squirrel, despite not being closely related—an example of convergent evolution. The scientific name, Petaurus breviceps, translates from Latin as "short-headed rope-dancer", a reference to their canopy acrobatics. The sugar glider is characterised by its gliding membrane, known as the patagium, which extends from its forelegs to its hindlegs, one on each side of its body. Gliding serves as an efficient means of reaching food and evading predators. The animal is covered in soft, pale grey to light brown fur which is countershaded, being lighter in colour on its underside. The sugar glider is endemic to parts of mainland Australia, New Guinea and certain Indonesian islands; and it was introduced to Tasmania, probably in the 1830s. It is a popular exotic pet but is prohibited in some regions, including parts of Australia and the United States (Wikipedia).

Artist Reply: they really are quite cute and thanks for noticing