The ss Normandie in Le Havre 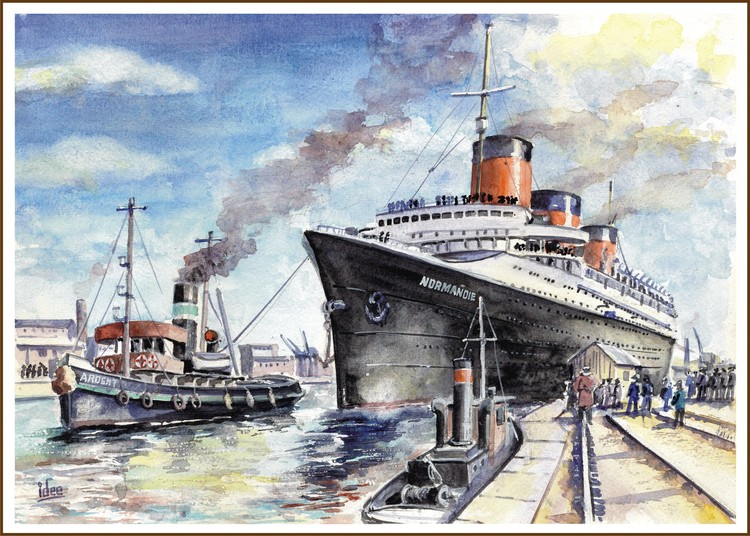 The "SS Normandie" was a French ocean liner. The ship was built in 1932 in Saint-Nazaire, France for the Compagnie Générale Transatlantique. At the time of the launch, it was the largest and fastest ship in the world and till today it is the most powerful turbo-electrically powered ship ever built by a steam turbine. The ship sailed mainly between Le Havre and the port of New York. An early form of radar was installed. After the outbreak of the Second World War the ship was seized by the US Navy and was named "USS Lafayette". The ship was converted into a troop transport ship, although they have also investigated the possibility of turning it into an aircraft carrier. During the conversion in 1942 the ship caught fire due to sparks from a cutting torch. The ship capsized and sank at the New York Passenger Ship Terminal. The ship was salvaged but it turned out to be too expensive to renovate the ship and in October 1946 it was demolished. For those interested, the general characteristics of the ship: Length 312 m, width 36 m, draft 11 m, height 56 m, water displacement 71,300 tons, propulsion 4 turbo-electric engines, power 160,000 hp, max. Speed 32 knots, crew 1,972 of which 848 in first class, 670 in second class and 454 in third class. Image size: 260 x 360 mm

GREAT FEEL OF THE TIME, IVO. YOU DEFINITELY CAPTURED IT IN THIS GEM.

Bummer... that did not turn out well. The Normadie that is... painting is good. Better days.

What a majestic beauty, this empress of the sea, regal, powerful, and graceful, you certainly have a talent to paint her in her most unforgettable memory! RIP SS Normandie

Artist Reply: Thank you Jill, I have a weekness for everything that has to do with shipping