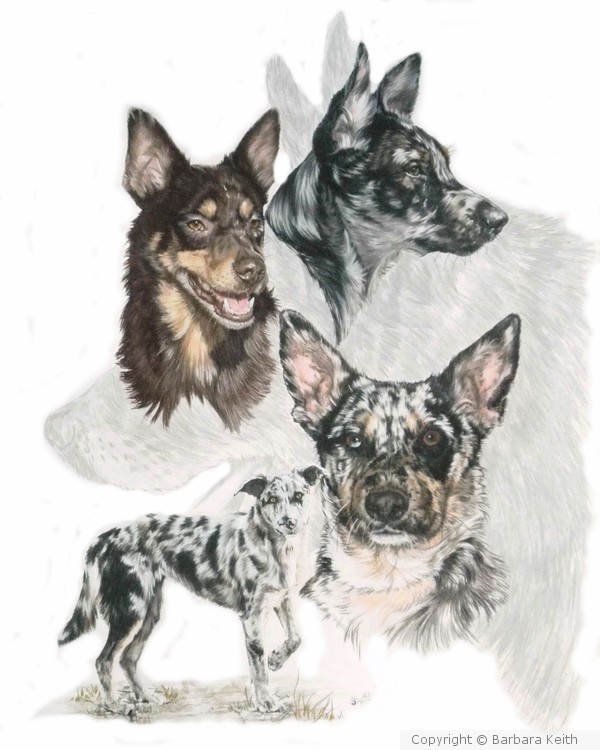 The Koolie (also known as the Australian Koolie or by the misnomer German Coolie) is an Australian dog breed. The Koolie is a working or herding dog which has existed in Australia since the early 19th century when it was bred from imported British working dogs. Robert Kaleski, in an article on Cattle Dogs in the August 1903 issue of the Agricultural Gazette of New South Wales, describes the "Welsh heeler or merle, erroneously known as the German collie," as a "blue-gray dog about the size and build of a smooth-haired collie, generally with wall eyes." The British background predominated in the dogs that came to be associated with the "German collie" name. There is substantial variation in the Koolie population, as Koolies were bred to exhibit different characteristics in different regions. The Koolie Club of Australia defines the breed based on its ability to work rather than on its conformation. However, most Koolie breeders refer to the Koolie as a breed rather than as a type, and assert that it "breeds true", with various types or strains. The Koolie is a 'hearding dog', one which has a natural instinct to cast out (i.e., circle widely), round sheep and bring them back to their owner. Koolies are known as silent, upright, working dogs. They are used for "hearding" sheep and also for quiet careful work at close quarters at lambing time or for "shedding" (cutting out) sheep (Wikipedia).

THEY ARE GORGEOUS. MARVELOUS WORK

Artist Reply: Until I did this piece, I knew nothing about the Aussie Koolie.. and thanks