Not Relly a Coincidence 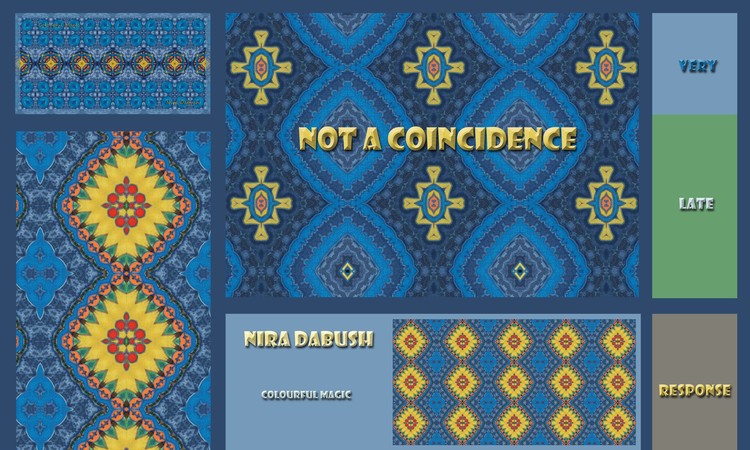 Collection of designs by myself

Very Late Response.
From The Story of Her Life.
Series of coincidences … Which NON of them coincidence really.

Nov, 2018
• She entered the clothing shop with her youngest son, in center of the capital city in a foreign
country, where she found the salesman looks so much like a famous musician.
• That same week, perhaps a day or two after… She was sitting in a coffee house, with her youngest
eating together, north of the same city. A tall man entered the place.. Looking inside.. hhmmm…
going outside, and entering again looking.. Than getting White cheese from the lady working there, eating it with his hands while standing,
Yes.. She recognized, quite surprisingly he resembles so much a great singer..
She thought this person, maybe an actor, by the scene.
She noticed his hair and beard as quite unusual… After he went out a couple came in and sat in a table next to her and her son.. It seems the first person; in this scene has a connection with this couple.
• There at the same capital city, in the church, she sat to listen to a concert with her son, who chose himself the concert.
When they entered the place she found out a man looks like a very well known singer, was there with his wife..
Yet younger. How extraordinary she thought.. Her son asked her did you wave this person, No I did not, she answered.
• It seems her son recognized none of the people reminded here.. Neither, she explained these situations.
She just could not. She could do nothing really.. Surely embarrassed.

Feb, 2019
• Sitting with her eldest son, in a L restaurant TA, Israel. Noontime… The morning was quite difficult timing for her…
She & her eldest son adjusting to the personal shocking news.
Suddenly she saw a most charming smile of a person standing behind her son… Yes, he seems so much resemble that well-known singer, younger than him.
She said none… As she thought of it later, it seemed to her, he should have come to their table to shook hands.. and sit with them.
, After all, he kind of asked for the attention… Perhaps came for them, she thought. (sure & thanks).
She had to say… she felt a bit or more than a bit surprised and excited to all coincidences..
Embarrassed and might laugh from embarrassment… this is SHE, Anyway. If she starts to laugh..
Somehow she can’t stop. It would be better if those came to a kind of “meet” her, would shake hands.
Or present themselves. Just a thought. Sometimes she is just too excited.

How many more situations like this will happen…
For what reason, she asked herself.
TIME FOR A CHANGE! BE CLEAR, PLEASE. And… Many thanks for the efforts.

Very Decorative Wonderful patterns & design,very Colourful with a message to instill in all of us Have a Beautiful Day

Artist Reply: I added the story.. thanks again dear friend.