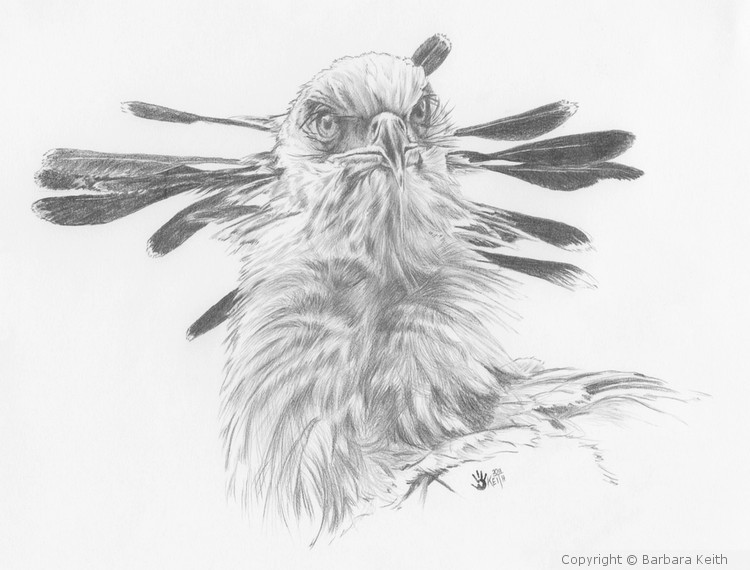 The secretary bird is instantly recognizable as a very large bird with an eagle-like body on crane-like legs which increases the bird’s height to as much as 1.3 m (4.3 ft) tall. This bird has an eagle-like head with a hooked bill, but has rounded wings. Height can range from 90 to 137 cm (35 to 54 in). Total length from 112 to 152 cm (44 to 60 in) and the wingspan is 191–220 cm (75–87 in). Body mass can range from 2.3 to 5 kg (5.1 to 11.0 lb) with 20 birds from southern Africa found to weigh an average of 4.02 kg (8.9 lb). Other attempts to estimate the mean weight range for secretary birds correspondingly lie between 3.5 and 4.2 kg (7.7 and 9.3 lb). The tarsus of the secretary bird averages 31 cm (12 in) and the tail is 57–85 cm (22–33 in), both factor into making them both taller and longer than any other species of raptor since these features are not as long in any other living raptor.The neck is not especially long, and can only be lowered down to the inter-tarsal joint, so birds reaching down to the ground or drinking must stoop to do so. From a distance or in flight it resembles a crane more than a bird of prey. The tail has two elongated central feathers that extend beyond the feet during flight, as well as long flat plumage creating a posterior crest. Secretary bird flight feathers and thighs are black, while most of the coverts are grey with some being white. Sexes look similar to one another as the species exhibits very little sexual dimorphism, although the male has longer head plumes and tail feathers. Adults have a featherless red face as opposed to the yellow facial skin of the young (Wikipedia).