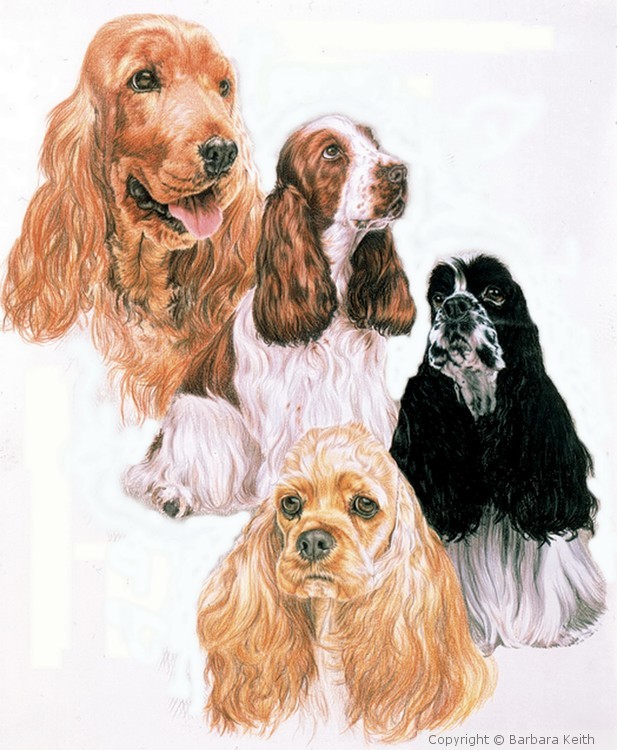 The modern Cocker Spaniel is descended from the Spaniel family, a large group that dates to antiquity. The word spaniel means "Spanish dog," and it's generally believed that they indeed originated in Spain. By the 1800s, Spaniels were divided into two groups: toys (primarily companions) and large hunting dogs. Hunting dogs were further divided into land and water spaniels. The Cocker Spaniel was named so for his excellence in the field hunting woodcock. In England, spaniels were a functional category, rather than an individual breed of dog, for several hundred years. The first kennel to gain recognition for the Cocker Spaniel as a distinct breed in England was the Obo Kennel of Mr. James Farrow. In 1892, the Cocker Spaniel was recognized as a breed in England. Shortly before, in the late 1870s, American fanciers began importing English Cockers to the United States. A liver-and-white Cocker Spaniel named Captain was registered in the first studbook of the National American Kennel Club (later called the American Kennel Club). The second volume of the studbook, printed in 1885, registers a black Cocker named Brush II. This dog was imported from England by Commings Cocker Spaniel Kennel of New Hampshire (https://dogtime.com).