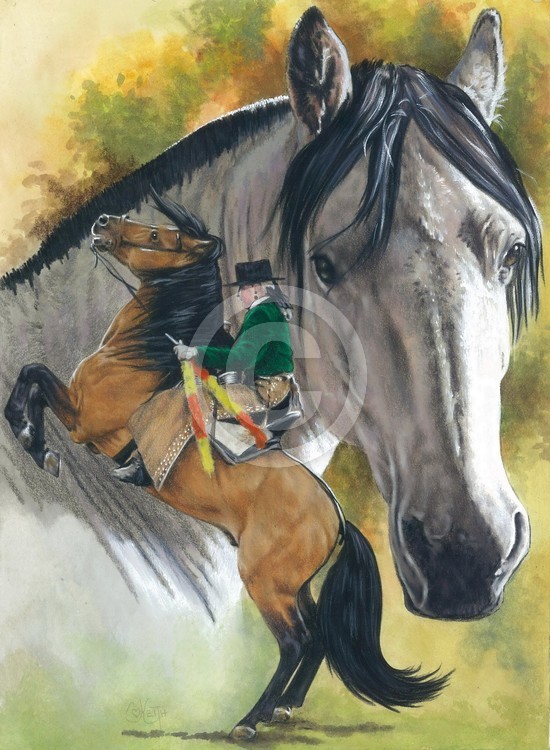 The Lusitano, also known as the Pure Blood Lusitano or PSL (Puro Sangue Lusitano), is a Portuguese horse breed, closely related to the Spanish Andalusian horse. Both are sometimes called Iberian horses, as the breeds both developed on the Iberian peninsula, and until the 1960s they were considered one breed, under the Andalusian name. Horses were known to be present on the Iberian Peninsula as far back as 20,000 BC, and by 800 BC the region was renowned for its war horses. When the Muslims invaded Iberia in 711 AD, they brought Barb horses with them that were crossed with the native horses, developing a horse that became useful for war, dressage and bull fighting. In 1966, the Portuguese and Spanish stud books split, and the Portuguese strain of the Iberian horse was named the Lusitano, after the word Lusitania, the ancient Roman name for Portugal. There are four main breed lineages within the breed today, and characteristics differ slightly between each line. The lineages include Alter Real (former Royal stud farm), the Coudelaria Nacional (National stud farm); Veiga (with stud farms Veiga, Coimbra and Núncio) and stud farm Andrade. These four lineages are responsible for the current genetic legacy of the breed. The Alter Real strain of Lusitano is bred only at the Alter Real State Stud. Lusitanos can be any solid color, although they are generally gray, bay or chestnut. Horses of the Alter Real strain are always bay. Members of the breed are of Baroque type, with convex facial profiles, heavy muscling, intelligent and willing natures, with agile and elevated movement. Originally bred for war, dressage and bullfighting, Lusitanos are still used today in the latter two. They have competed in several Olympics and World Equestrian Games as part of the Portuguese and Spanish dressage teams. They have also made a showing in driving competitions, with a Belgian team of Lusitanos winning multiple international titles. Members of the breed are still used in bloodless bullfighting today, where it is expected that neither horse or bull will be injured (Wikipedia).