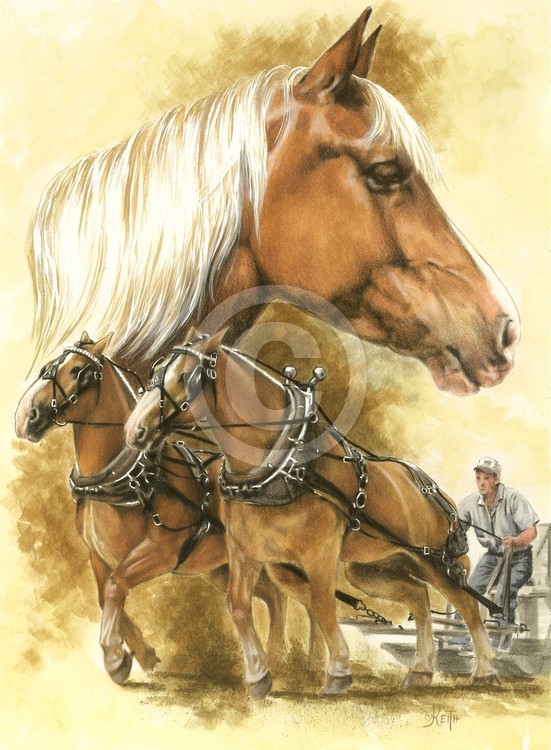 Historically, it is theoretically possible the Belgian may have had ancestors that were destriers in the Middle Ages, although no independent evidence supports this claim. The foundation stock for the Belgian was originally known as the Brabant. Other names for essentially the same breed include the Cheval de trait Belge, Brabançon, and Belgisch Trekpaard. Until the 1940s, the Belgian and the Brabant were essentially the same breed. Following World War II, the Brabant in Europe was selectively bred to be thicker bodied and heavier, while in the United States, the Belgian was bred to be somewhat taller and lighter bodied. The main use was as a farm horse. Closely related breeds include the Trait du Nord and Nederlands Trekpaard. In 1887, the American Association of Importers and Breeders of Belgian Draft Horses was founded in Wabash, Indiana, to register and keep track of all Belgian Draft Horses. Today, the Belgian is the most numerous breed of draft horse in the United States. Importation of Belgians to the United States ended in bulk after the beginning of the Second World War with Erwin F. Dygert transporting the last Belgians out of Europe as the war was beginning (Wikipedia).

MAGNIFICENT !!!! MY HUSBANDS FAMILY WAS IN THE HORSE PULLING FOR "YEARS".. AND WON ABOUT EVERYTHING AROUND. WE WOULD GO VISIT THE FARM AND HORSES AT TIMES.. THE BOYS EVEN GOT TO RIDE THE SLED WHEN WORKING THE HORSES... ONLY COULD TALK WHEN THE HORSES WERE STOPPED FOR A REST. GORGEOUS ANIMALS.