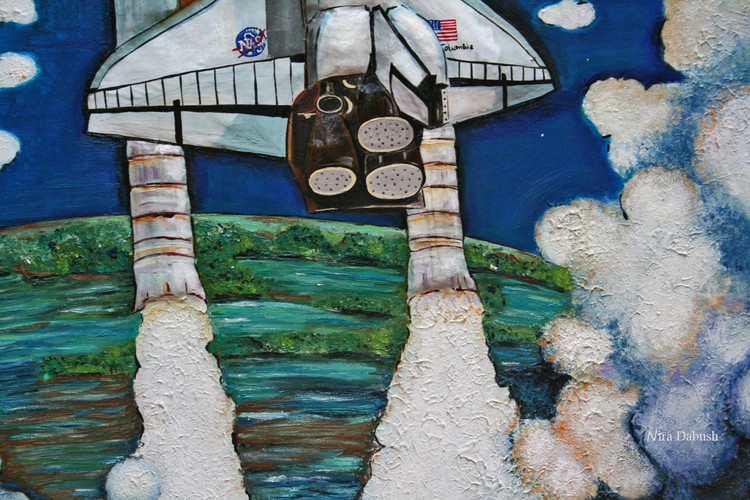 Star Dust- Mixed media- Papier Mache'
Oil on Canvas- 130 cm x 100 cm.
2003. Located in my studio.
A painting, I paint, In memory of the seven Columbia astronauts on the space shuttle Columbia,
that was launched on January 16,2003.
The seven astronauts died on February 1, 2003,
when Columbia broke apart during reentry into the atmosphere over Texas on its way to Kennedy Space Center in Florida.


This is my gift , donation to humanity.

The event influenced my creation that time of my life VERY STRONGLY. Therefore I dedicate this work of mine to both my sons.

It is in need of restoration already. And honorable place to be hanged.
It should be hanged in a MOST Suitable place for it. ( for the time and efforts, emotions and more)
Two places I see as logical places for this work of mine : NASA, Or a place where students do researches about Space Shuttles etc.
( The second idea was given me my youngest son, about 13 years ago, when he was small kid and this was his most favorite painting of mine. )
Perhaps today, you can help find the right suitable place for it.
Thanks for visiting and commenting.
Thanks for your support during my internet years.
Copyrights to MYSELF.

Great tribute Nora. Love it , a wonderfulwork of art

Good to be back to see all the wonderful Artistry,this is truly memorable,,,My thoughts & Prayers go out to there families,,,My cousin being ,,,NIKOLAI BUDARIN a retired COSMONAUT was stationed on MIR. Station,so My mind goes to all those that Explre the UNIVERSE