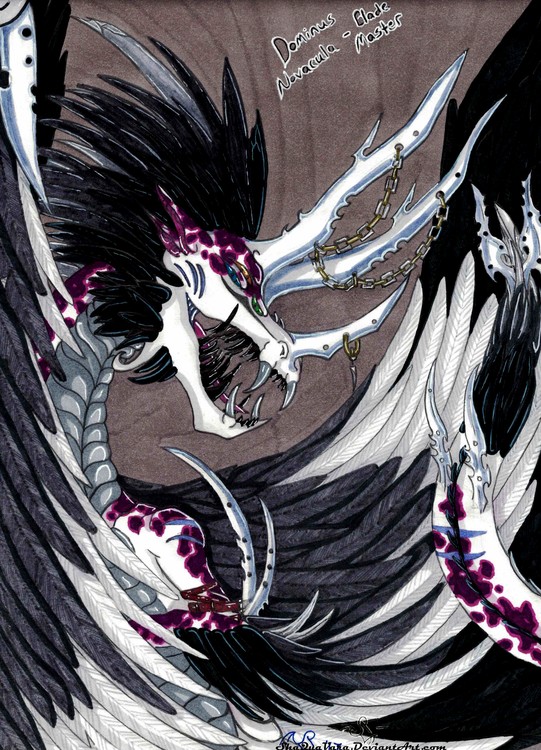 A very imposing figure...especially when you consider he's about 3 times as large as my Self, which is 13.3 feet at the shoulder. He's been very present for the last couple weeks and hard to ignore. I know I know him, or of him for his title was known to me before I had a finished sketch. Dominus Novacula is Old World Latin and even in my head I do not hear it in modern English. While that is what is heard, I too know this is not his name. I know a surprising lot about him, or his species. But I have no idea how, why, or where I gained such. He is something along the lines of "bad" without being "evil." He is exceptionally direct and literal and holds grudges with a long, near infinite memory. He's not an Ancient. He goes a bit farther back. He is one of the First Ones. I don't think He is here so much as intent...but more like He is waiting for something. He has referred to something called the "Hounds of Perdition" but I am unsure what it refers to. I don't know if I would associate them with "hell" or any one religions understanding of it...the archaic form of Perdition is Utter Destruction and the absolute form is simply Loss. I won't assume anything however. I pray to the Gods both Above and Below. Just because some are more directional doesn't mean saint or sinner. If Novacula wishes to tell me what they are, I will listen. Assuming one or the other could be completely off base. First Ones don't denote compass points to good or bad. I am uploading this pencil work just encase I ruin the picture itself when I try to color it. Star!DO NOT TAKEStar!DO NOT REUSEStar!DO NOT COPYStar! Writing and drawing are property of the artist. "Unauthorized use or redistribution of artwork or photography as well as copying, tracing, altering, or heavily referencing without permission is considered art theft. You and/or your guardians can be sued for plagiarism and/or copyright infringement. Do not assume that little changes will make it all yours and that you will not be held responsible. Re-using the exact piece as-is, such as for online role-playing, even if you do not claim it is your own, is unlawful redistribution. ALWAYS ASK THE ARTIST."