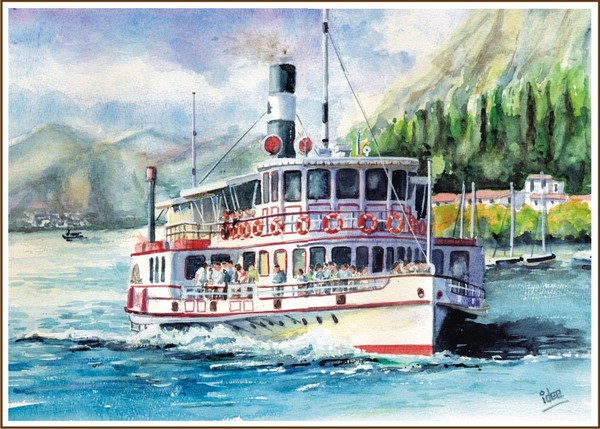 Looking like an old chimney-ornament, this paddle-boat will never pass by unoted. Builded in Zurich (Switserland), with his sistership "The Italia", the boats were transported to the Garda-lake, assembled again in Peschiera and put into service in 1903. After a very stirring carreer, in 1983, the ship received his present outlook. The old compound steamboiler was, for economic raesons, replaced by a diesel-engine and the large wheel-house and the splendid upperdeck where created. Since than the "Zanardelli", in the touristic-season, shuttles on the lake and is very popular by the many tourists

So Prettily Detailed Steam Ship,Full of grace and you captured it so well

Love the painting and the back story.

Artist Reply: Many thanks Joan

WONDERFUL, SO WONDERFUL. EXCELLENT DETAILS AND PAINTING. RODE ONE ON THE SAUBLE RIVER. FUN. GREAT JOB MY FRIEND. JOANIE