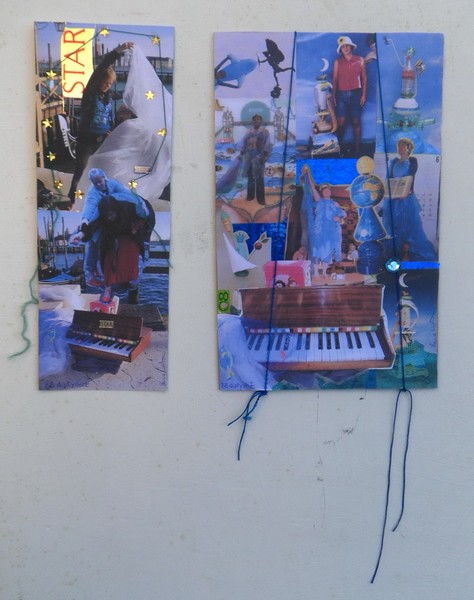 BB diptych 1 (alias "the ASCENT of a TRIO to the EMPYREAN") cm 23x8,5 refers to Bosch's work "The Ascent of the Souls to the Empyrean" (1500-1503) now at Palazzo Ducale in Venice. Bosch's work is revisited with memories of 505 years later, taking place in the performance "[email protected] per TRIO" on 27January2008 in Venice, with the pianist Dario Della Rossa and mezzo-soprano Amadea Fayne. BB diptych 2 (alias "Sheren's Towers") cm 23x14,5 refers to "The Tower of Babel" of Bruegel. His work is revisited with a collage of my towers, consisting in paintings, installations, performances, along the years, since 1996: ...comme un oisEAU, Totem I-IV, The Statue of Liberty, at Eros Statue and London Bridge and in The "[email protected] per TRIO" performance in Venice. Also featuring performance 2012 at Katz's Deli in New York and in The Netherlands in 2013. The diptych BB was sent to Hertogenbosch NL to take part in the mail art exhibition "Bosch after Bruegel" (curator MiiColori Toon Joosen for The Museum of Instant Images) in coincidence with "Jheronimus Bosch: Visions of a Genius") at Bosch Art Center. From February 2016