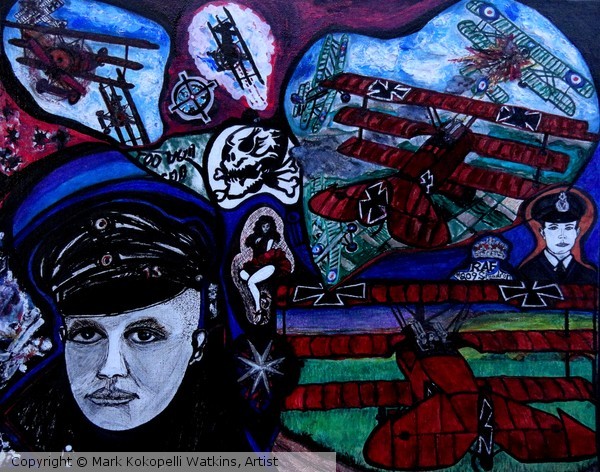 "The Red Baron's Last Dogfight-WWI," c.2014, an acrylic on 16" x 24" canvas board, showing the Red Baron/ Blue Max(officially credited with 80 Air Combat Victories), being shot down by the Allied Forces RAF Pilot flying his Sopwith Camel,... Canadian Captain Arthur "Roy" Brown, with one 303 caliber bullet in the chest, damaging the Baron's heart and lungs. Amazingly, the Top Ace and German national hero managed to land his Fokker Dr. I 425/17 tri-plane in a field near the village of Vauxsur-Somme. Sgt. Ted Smout of the Aussie Med. Corps., got to the Red Baron (25 yrs. old at the time) to hear his last word, "kaput!" Ironically, Manfred Albrecht Freiherr Von Richthofen, the famous "Red Baron" was shot down by Captain Brown with the same maneuver, "diving straight down from above(in cloud cover) to fire straight down into the enemy plane," unfortunately causing deadly damage to the pilot and plane. The woman appearing in the middle of the piece is actress Alice Eve from a pic of her in 2007. She is someone these pilots would loved to have meet. The Red Baron was born on May 2, 1892.