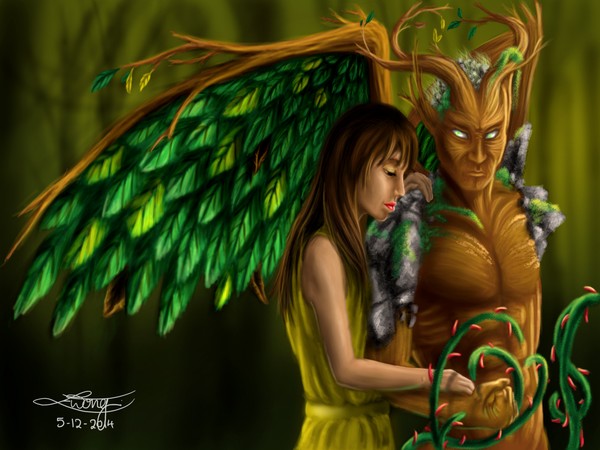 Torel had a healer's touch.. For centuries where man has polluted the waters and commit deforestation, Torel was there to absorb the pollutants and help healed whatever that was left in the destruction of man's wake. But over the years, the amount of evil that has been committed is just too much for Torel's power to bear. He has become weak and can no longer heal the plants or purify the water. His purpose in life has been crippled. Like a chef who has lost his sense of taste or a painter who has become blind... His sole purpose in life has been ripped away from him. He used to be blooming with more leaves on his "antlers" and wings, but now it's turning yellow and most of it has fallen without it regrowing. Now, the only leaves that remains are his "feathers" and even then, they're turning yellow and brown. His sadness and depression has been felt by the plants and in return, he feels their sorrow and anger which brews to a dangerous combination. The forest grows dim and gloomy and whoever steps into the forest with an axe or of a likeable weapon, that person will never step out or ever been seen since. Torel and plants alike has forgotten what it was meant to be at peace as all plants were. This may result in war between Torel and man as an angry mob in a nearby village are plotting to enter the forest with torches, axes, swords etc. A girl by the name of Foriah could never believe that a forest was capable of such things. She managed to convince the people to not attack as she enter the forest herself and figure out what is going on. She wasn't regarded of much value as she always erred in everything she does and leaves a mess behind for the rest to clean up after her so losing her wouldn't cause for much grief anyway. When she entered the forest, her dress shone bright in the grim atmosphere that Torel almost mistook her for sunshine. However, him with all his skepticism and hatred was waiting for the perfect moment for her to give him and his peers a reason to convict her of being guilty of desecrating their home. However, she never gave them any which made him despise her even more. Though the forest looked gloomy, she saw all the beauty in it. Moss has never appealed to anyone more than it did for her, observing it's every eccentric detail. The little white flowers that grew, hidden between the rocks.. she found them and just loved looking at them. Her love was contagious. The forest didn't seem to be threatened by her and showed it's hidden beauty to her more and more. There were so many things that man has never seen and the forest was showing all their secrets to only her. When they finally met, Torel told her to get out and the forest that was lit up with beauty suddenly hid once more as if scared of it's scorned parent. Foriah ran back to the village. The villagers were shocked at her return and asked what happened, before she explained the creature that ousted her, she remembered of the forest's hidden beauty and it should never be destroyed. She lied and said there was nothing dangerous there.... This forest may just have a chance at survival with the help of Foriah but will Torel let her in on the rescue? Or will his skepticism get the better of him?

Beautifully Expressed,Elise.Many People Fight for Rights of Animals,and Clearly Overlook the Living Beings That Flora Offers.Can Complete Balance Be Achieved In Our World?I'm Sure Everyday,as Vegans,and Those Similar, Pride Themselves In Saving Animals,the Salad on Their Plate Screams the Same as Any Livestock,Usually Eaten Raw.From All That Bad We Have This Idea of True Utopia.It's Beautiful.Nobody Gets Hurt.But Can We Ever Reach That?Being Human?And...We See How the World Really Works.Are We Only Meant to Be Part of the Problem?I Feel We May Be No Different Than Livestock,Ourselves.Oh My...The Thoughts You Provoke.Very Nice Expression of Thoughts,and Beliefs. :)

Artist Reply: Thanks, I heard that the dugongs here are in danger because people dont give care for the sea grass under the water. If we help saving the most fundamental of the food chain, we can help save everything above it. Yea, I understand where you're coming from. That's why some are fruitarians... because fruits drop from trees, only then they eat but I could never commit myself for that. Yea, unfortunately, true peace is only a utopian idea but hopefully we could reach a point that is close to it. With technology advancing and more researchers trying to find ways for a more peaceful existence, it might just happen. I'm feeling positive of at least that :) Thank you for your sharing your thoughts, Tim