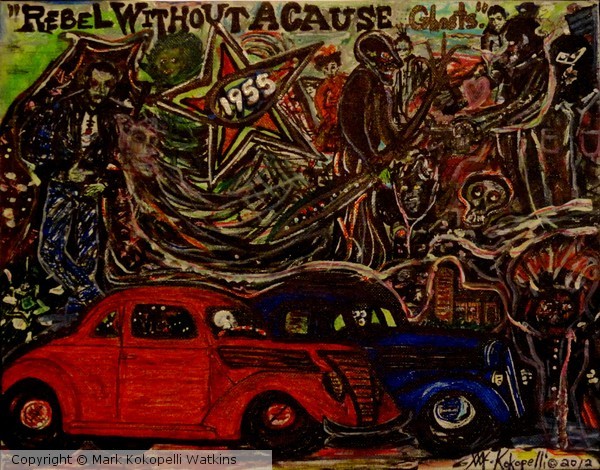 Fifty years later, my dark tribute/revisiting of the movie, "Rebel Without A Cause," filmed in 1955, by 20th Century/Warner Brothers, starring Indiana's own, James Dean (actor)...movie also including Natalie Wood, Sal Mimeo, Dennis Hopper, and Jim Bakus. This is the ghostly revisiting of the car race towards the ocean cliff done in a Pen/Ink illustration on an 11" x !4" Canvas Panel...the classic cars illustrated in this piece are: Ford Coupe-1937 and a Chevy Coupe-1936 (these were my choice of cars...Hot Rods I love them!! Some payback in this scene:) The title is..."Wanna Drag?" c.2014

In a style all your own, your artwork is one of a kind! This looks great, it is eye popping.

Amazing piece. This just burst's out into the room.

Artist Reply: I could have done this like the movie showed it, but this one got darker as I worked on it, due to the death of one of the youth racers in the end...driving off the cliff as a dare!

Mark: really good pen and ink work. Love the colors and of course, love the movie also. Congratulations. If you have time, please stop by and view my portfolio. I do photorealistic colored pencil paintings on matte surfaced Dura-lar polyester film. Best regards, Will

Artist Reply: Will, thanks for the compliment on this art piece honoring James Dean. I have been enjoying my pen/ink pieces,...even in color, more recently. I used to do all of them in blk./wht........so, thanks for sending me a message of support. I sure will take a look at your artwork, which sounds very interesting and complicated. "Photorealistic colored pencil paintings on matte surfaced Dura-lar polyester film" must have some great effects to them! Most appreciative, Will and I shall be looking at your works! Mark