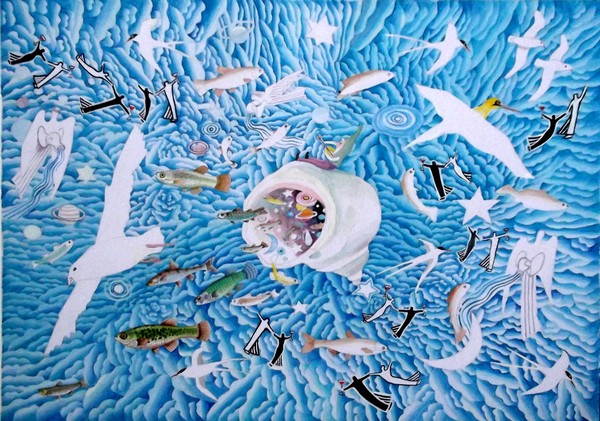 Creation Myth. My individual attempt to portray The Creation (or the creation of my inner universe.) Too much analysis can kill rather than enlighten but roughly the shell is sort of the female and the figure seated on it playing music sort of the male symbolic elements in The Creation. The blue is both the blue of the ocean and of the oceans of space before division, so that both birds and fish and people and planets move into it. The original of Creation 1 is in a private collection in Devon.

Very airy feel and harmonious light and colors in this wonderfully created artwork! Also: I like the whole concept behind the artwork.

Artist Reply: Thank you very much

Artist Reply: I'm so pleased - its a style I've developed over the years

This is truly an Interesting & most Imaginative piece! Stunning Complexity!