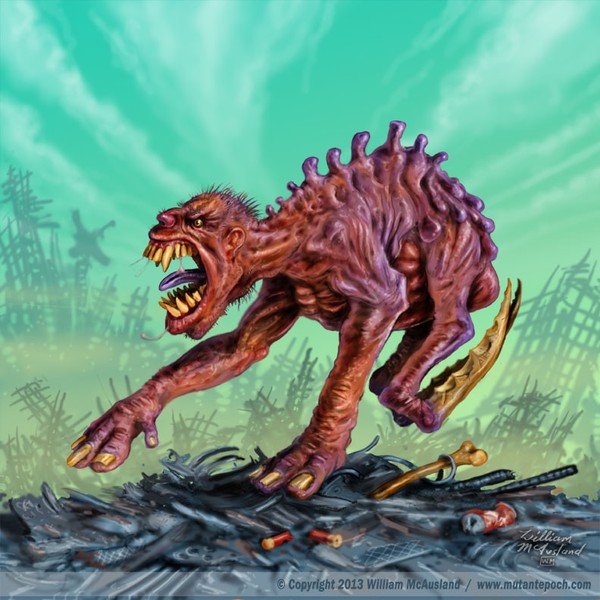 A Sickle Foot is a nasty, nightmarish pack hunter of about the size of a black bear. Territorial, cunning, and needlessly cruel, this mutant predator can be found in both remote ruin areas as well as along well traveled trade roads and woodland paths. In an attack, Sickle Feet charge out from cover, often from multiple directions, and go directly for the nearest prey animal or person, leaping up at the last second and extending their rear, yellow clawed feet to rend the target open, often eviscerating the hapless victim in the process. Besides attacking with their terrible sickle clawed rear feet, they can deliver a horrendous bite in conjunction with their claws, going for the throat of their intended victim. Although considered an animal by those forced to live near Sickle Foot territory, new era scholars and bioengineers adamantly insist that these new mutant beasts are at least a quarter human. Besides DNA testing, which proves some human lineage, experts also point out that Sickle Feet can speak to each other in the area’s old world language, although what they say sounds more like grunts and growls. Witnesses say they have overheard these things discussing an attack on an approaching refugee caravan, and during the attack, swore at defending humans who were putting up a good fight. Those sent to study the Sickle Foot also discovered that some individuals exhibited mutations. In one case, a specimen was met that had a pair of human arms as well as its regular forearms and rear clawed appendages; the beast using its human arms to fire a bow from a distance and kill the research expedition’s guide. Other mutations have also been documented, ranging from extra sickle limbs, throwing spines, plated bodies, multiple heads, enlargement, and even a bat winged variant.     A rumor also persists of several humanoid species using Sickle Feet as guards or tracking animals, and in one instance, of skullocks riding these beasts into battle.     While speculation, rumor and second hand accounts are often dismissed by those who haven’t encountered Sickle Feet, what is known is that they are entirely carnivorous, quick, observant, hard to approach unawares, and merciless. Accounts of their attacks on travelers, villages and looting expeditions repeatedly state that Sickle Feet do not differentiate between ripping apart men, women or children, regardless of their pleas for mercy. Worse, whatever humanity exists inside these beasts, they seem to have utterly no awareness that the humans they prey upon are related to themselves. The notion that Sickle Feet could crossbreed with regular humans has only been reluctantly guessed at, likewise, speculation on where these beasts came from is also discussed cautiously. Without a doubt, Sickle Feet are genetically engineered, as opposed to a purely randomly evolved mutant species. The reason for this claim is that several excavation teams reported that they encountered these monsters, in concentration, near ancient bio-industry facilities, both above and below ground. The fact that these ancient sites often had robotic and fixed relic defensive measures in operation, along with electric power, points to some intelligence behind the occurrence of these beasts. Sickle Feet, in conclusion, seem to have their dens near these high tech ruin sites, and whether operating under their own volition or not, are highly territorial and attack with extraordinary zeal and fight to the death on home ground. Who or what their creators are, is still a mystery, as thus far, no dig team has been able to defeat the Sickle Feet and the automated and robotic defenses of their lair. New era communities sitting near these high tech, beast infested sites, are hesitant to delve too deeply into who created the Sickle Feet, nor move against the sites in force. Clearly, since the mysterious bioengineers have the ability and technology to create such hellish beasts, what else could they bring to bear if provoked? A Sickle Foot has excellent morale and will stay in a fight at least until half their own number are defeated without inflicting equal casualty numbers among their targets. They seems to favor the flesh of humanoids over horses or oxen, as when attacking travelers, ignore these herbivores in favor of men and women. Riding dogs, on the other hand, are attacked equally as often as humanoids, but left uneaten on the field of battle. For their own part, riding dogs and all other carnivorous mounts, pets and guard beasts seem to have a special hatred of Sickle Feet, and go beyond their normal aggressive tendencies to try and go after these strange, leaping, swearing mutants. Beastial humans can smell the distinct, putrid odor of a Sickle Foot from hundreds of meters away, if the wind is favorable, and can alert human comrades to the presence of the threat, negating the normal initiative bonus of the predators.