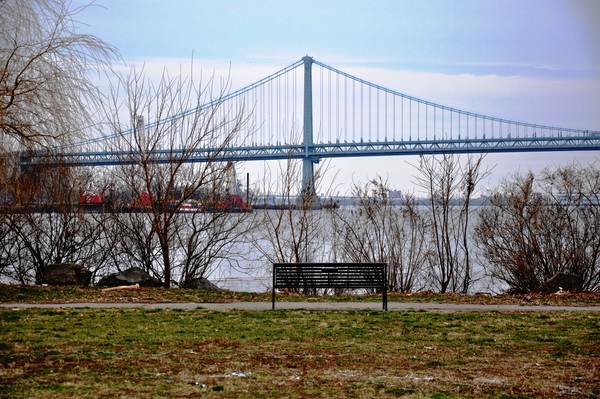 Wow, as I look at the calendar it is already January 18th. Como pasa el tiempo. That is January 18, 2013. It's been some time since I have shared one of my "photos of the day." I drove to the park on January 1, 2013, the first day of the new year with all intentions of writing and sending one of my moments on that day. Never too late. I want to share one of my first photos for the new year with my friends and loved ones! It was not a very cold day for January but it was crisp and the sky was clear and nice on the breathing. I looked around as people walked their dogs. I looked at the water, it was still and not as high as in the summer. There were remnants of the celebration of new year's eve on the grass. It somehow didn't feel like the beginning of a new year. The stillness is gravitating. The bench looks inviting. As you look through the branches to the left the red captures your eye. The blueness of the bridge extends into the blue sky. Just as we all have a story to tell, each branch has its own identity. The water is serene. Yes, this is how I want to begin a new year. A still photo and then add the touches as the days go on. This is what it is about as you get up in the morning you walk into a scenario and from there the scenario changes around you. Does it change or do you/can you make the changes? Take that still moment and bring it to life. Whatever you choose to do as you place your feet on the surface it will take you from there. We can choose to look at the photo with the bench, the bridge, the scenery or we can choose to become a part of it and sit on the bench, touch the branches, cross the bridge and walk through the path. Never too late to wish all of you a most healthy, prosperous and joyous new year and more to come! Abrazos y mucho amor. Momentos.....Luz..... Deja que la claridad te saque de la oscuridad!