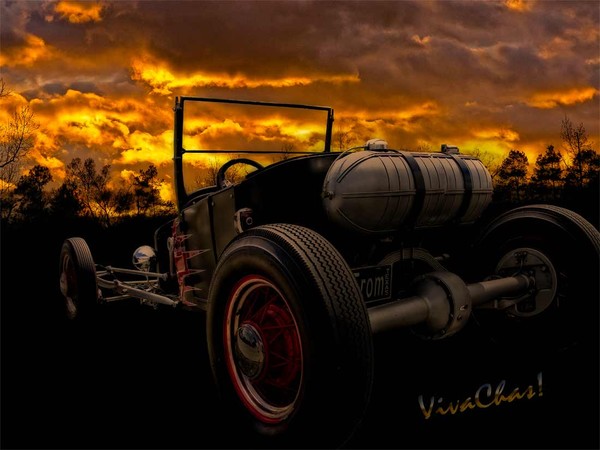 Ford Rat Rod T and a Sundown Destination One of the pleasures of cruising in a nice hot rod or rat rod is destination.  It's kinda like off-roading in a way.  Senseless if Ur not going anywhere.  Even if it's a simple pick-nick at the top of some hill - U has a responsibility to be going somewhere in the old Ford Rat Rod T ~:0) This great old Ford Rat Rod T - I really enjoy saying and typing "Ford Rat Rod T".  There's something very satisfying about that.  There goes another digression.  I knows some sticks in the mud who berate me for my digressions.  Personally I find them very Capra-esque - Ha! Anyway this great old rat rod is the very essence of spare.  It is so simple and clean it brings a tear.  The mill is a simple straight-six with a couple of nice carbs with proportioned chrome air cleaners possessed of a jaunty angle in their mounting.  A very refined look in the open engine bay.  I'll do a pix featuring that end of the rod soon.  And the rear end is a real bewdy!  There's nothing there!!  How cool is that?  And that fuel tank is a big fat work of art.  They've welded up two halves of something to make the thing.  And that's saying something with that quality of weld-work.  Every detail on this Ford Rat Rod is quietly spectacular.  I guess that's what they call "Zen". ~:0) So - here we are at one of me fave sunset spots.  When are we there?  We're there at sundown.  What are we doing?  We're having a nice time.  We had wine. (and Ronald our designated driving robot for such occasions - Ha!) - - - for U blue-noses out there - we were there for the night.  The place is a bed-and-breakfast.  It's a popular destination - so there! So there U have it!  Great looking!  Great Driving Ford Rat Rod and a Great Destination.  U should try it sometime.  There's something to be said about going somewhere cool in a cool ride.  Don't forget to get urself and Ur loved ones nice prints of this little bewdy for Ur walls.  -  It's a Good Thing ~:0) VivaChas! Ford Rat Rod T at Hot Rodney Hot Rods & VivaChas!

This is excellent work!

Artist Reply: I believe u r correct Elizabeth - I would go so far to say that your sentence is concise and an excellent example of communication and grammar -- thanks for sharing it with me - much appreciated ~:0) VivaChas!