Shelby Cobra Before the Storm 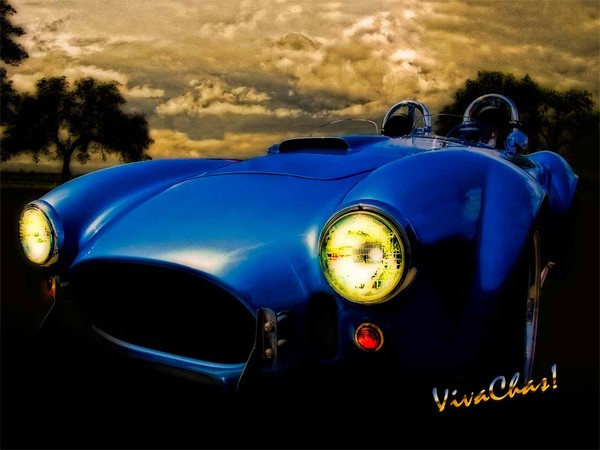 Shelby Cobra Before the Storm There’s something to be said about racing a rain-packed blue norther in a Shelby Cobra Roadster. We managed to keep just ahead of the icy thunderstorm harbinger of the cold front. Made it difficult to drive the speed limit all the while knowing sleet was right behind us. ~:0) This Cobra had a house-full under the hood. A Big Block – race prepared beat out a tattoo on the road as we fairly roared down State Hi-way 16 from Kerrville headed for Bandera Texas the Cowboy Capital. We took the scenic route to say the least. That part of the road is two lanes and drops hundreds of feet from the high plains into the hillcountry. We passed dozens of ranches. We crossed several streams. All places I’d used for hot rod photo backdrops in the past. We couldn’t stop to admire them. We had a serious storm to beat into the heart of the hills of Texas. It was exciting. I know I had fun in a Shelby Cobra that could make me old Canon G11 swing out, left and right from its lanyard from the G-forces created in cornering and braking. Woof! What a rush! – Ha! This was not the same Shelby Cobra I had photographed after a police chase up the other end of Hi-way 16 up to Bandera a month ago. That was a thrill on its own merit! This Cobra has multiplied horses over that “Outlaw” Shelby. The owner of the ride said it cranks out something close to 700 bhp thanks to its twin-turbos. And I believe him! This thing could lay a hundred yards of 11s on a long stretch of private road. None of our gang would ever dream of doing that sort of thing on a public road. No Way! We do our racing and performance driving only on fully sanctioned race-ways or on private property. Yep – thas what we do – that’s right ~;0) The print of this Shelby Cobra is so pretty I’m giving one to my Valentine this year. Nice big one! Lots of bewdiful detail in it and big enough to see across the game-room. You should get one for yer own self or maybe Ur sweetie or sweety as the case may be ~:0) VivaChas! Shelby Cobra Before the Storm at Hot Rodney Hot Rods & VivaChas!

So beautiful Chas and I love the story.

Artist Reply: Thanks for saying so Queenie - story's half the tale ~:0) VivaChas!